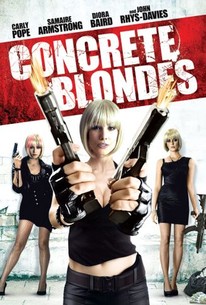 Three women discover a suitcase containing $3.1 million at the scene of a gangland massacre, but find their attempt to smuggle the money off-shore thwarted by a scheming boyfriend saddled with a debt to a dangerous crime boss. Later, as the women don platinum blonde wigs and prepare to gun down the gangsters they stole from, it's impossible to tell who will be holding the cash when the gun-smoke clears. ~ Jason Buchanan, Rovi

There are no critic reviews yet for Concrete Blondes. Keep checking Rotten Tomatoes for updates!

There are no featured audience reviews yet. Click the link below to see what others say about Concrete Blondes!