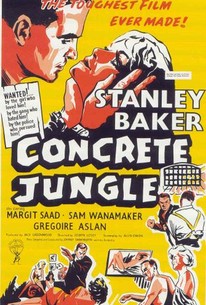 An ex-con who's taken part in the robbery of a racetrack is caught and sent back to prison, but he won't tell his fellow gang members where he's stashed the loot. The gang kidnaps his girlfriend and has him tortured in prison in an effort to find out where the money is.

Victor Beaumont
as Men at Party

Richard Shaw
as Warder in Van

Not a shot is wasted, [Losey's] control over his material, his actors, and his visuals is more rigorous and more strikingly personal than before. In The Criminal he has at last fought his way to the top.

A cold-hearted portrait of the consequences reaped from hot-blooded follies.

Even though the physical violence is kept to a minimum, Losey uses the sound of a riot to help feed the mounting oppression, mirroring the psychological turmoil within Bannion himself.

Neither a dynamic central performance, nor a director and script-writer of individual talent, can conceal the frayed conventions of a story-line largely irrelevant to this film's main purpose.

Losey is an incomparable engineer of frenzy

Losey does an excellent job of depicting the brutality of both prison life and the British underworld.

i like stanley baker and this is a showcase for him as a tough loner who is outmaneuvered by a criminal gang. most of it takes place in prison where he is quite at ease as a top dog. then he's released and pulls a robbery with some associates and everything starts to come apart. losey throws u in the midst and at times it's hard to get your bearings but stay with it for the great final scene