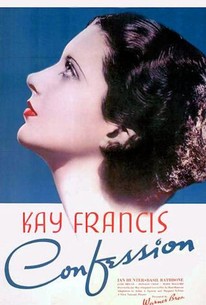 German director Joe May brought a decidedly Teutonic ambience to his American film Confession--no surprise, since the film was based on the 1935 German production Mazurka. Kay Francis plays a onetime singer who confesses to the murder of her pianist, Basil Rathbone. In flashback, we learn that Rathbone had been responsible for the breakup of Francis's marriage. Years later, Rathbone came back into her life, this time with the intention of seducing Ms. Francis' grown daughter (Jane Bryan). In a variation of Madame X, Francis was stuck with the dilemma of deflecting Rathbone from his "mission"--and of keeping her true identity secret from her daughter. Prior to Mazurka, the Hans Rameau story upon which Confession was based had been filmed as a silent picture starring Gloria Swanson.

Sam Rice
as Man at Station

Al Lloyd
as Man at Station

Perc Teeple
as Man at Station

Jack Richardson
as Man at Station

Lyle Moraine
as Usher at Theatre

Dawn Bender
as Lisa as a Baby

If the role of the unhappy Russian opera star in Confession is intended as a consolation prize to the star for losing the Grand Duchess Tatiana part in Tovarich, I'm afraid it won't do much to take her mind off her grievance.

There are no featured reviews for Confession at this time.