Confessions of an Opium Eater1962 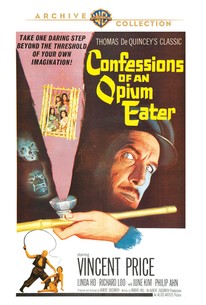 Confessions of an Opium Eater Photos

Very freely based upon the book by Thomas DeQuincey, Confessions of an Opium Eater is set in San Francisco during the Tong Wars of the 1800s. Lotus is one of a group of women kidnapped from China and brought to the United States, where they are to be traded in exchange for precious opium. Fortunately, Lotus and her compatriots are rescued by mysterious benefactors and are spirited away. Soon after, DeQuincey sneaks into Chinatown and contacts a merchant by the name of Chin Foon. Both men share the mark of the Moon Serpent, signifying that they work for the enigmatic Ling Tang, who is the mastermind behind the human auctions. Foon instructs DeQuincey to locate Lotus. He finds her but tries to escape with her, rather than handing her over to Foon. His treachery is discovered, and he admits that he is working for both sides in the Tong conflict. He escapes and, stumbling through the bowels of Chinatown, discovers many other bizarre secrets. He also learns that another of Tang's employees, Ruby Low, is not as loyal as supposed. DeQuincey continues prowling around Chinatown; obviously, he has some sort of plan in mind - but what is it? And who is he really working for?

Florence Vidor
as Herself

King Vidor
as Himself

Critic Reviews for Confessions of an Opium Eater

Puts to shame anything posing as serious philosophical thought in the Matrix films.

Leaves you high for at least a half hour after viewing.

(The) distributor's alternate title SOULS FOR SALE...advertises the film's sinister proceedings right from the opening credits

Audience Reviews for Confessions of an Opium Eater

There are no featured audience reviews yet. Click the link below to see what others say about Confessions of an Opium Eater!

Confessions of an Opium Eater Quotes