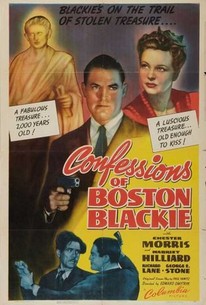 Chester Morris makes his second screen appearance as crook-turned-detective Boston Blackie in this superior series entry. This time, Blackie gets into trouble when he attends an art auction with his millionaire pal Arthur Manleder (Lloyd Corrigan). It so happens that the auction gallery is run by thieves, which heroine Diane Parrish (Harriet Hilliard) has just discovered. To keep her quiet, head crook Joe Buchanan (Ralph Theodore) takes a shot at Diane, but though he only wounds her he kills sculptor Allison (Walter Soderling). Conclusion-jumping Inspector Farraday (Richard Lane) assumes that Blackie fired the shot, forcing our hero to spend the rest of the film eluding both the police and the criminals. Highlights include a hilarious fit of rage perpetrated by secondary villainess Joan Woodbury, and an amusing if slightly sadistic running gag involving hapless ice-cream vendor Billy Benedict.

George E. Stone
as The Runt

Harry A. Bailey
as Bidder

Herbert Clifton
as Albert the butler

Eddie Fetherstone
as Cabby
View All

A superior version in the Boston Blackie series.

There are no featured reviews for Confessions of Boston Blackie at this time.