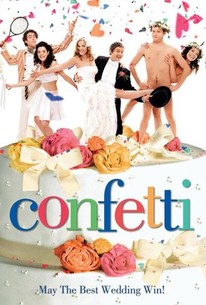 Critics Consensus: This improvised mockumentary has its funny and even sweet moments, but it's not as witty or sharp as Christopher Guest's offerings.

Critics Consensus: This improvised mockumentary has its funny and even sweet moments, but it's not as witty or sharp as Christopher Guest's offerings.

Critic Consensus: This improvised mockumentary has its funny and even sweet moments, but it's not as witty or sharp as Christopher Guest's offerings.

"Confetti" is a hilarious and affectionate comedy that follows three couples as they fight it out to win a bridal magazine contest for 'Most Original Wedding of the Year.' The film features an ensemble of comedy talents including Martin Freeman (The Hitchhiker's Guide To The Galaxy, Love Actually, 'The Office'), Jessica Stevenson (Shaun Of The Dead, Spaced, The Royle Family), Stephen Mangan (Green Wing), Felicity Montagu (I'm Alan Partridge), Rob Webb (Peep Show), award-winning comedian Jimmy Carr and Alison Steadman (Topsy-Turvy, Life Is Sweet).

Mark Heap
as Registrar
View All

Even if it's not quite an affair to remember all year, this BBC Films mockumentary about three wacky weddings is pleasant and enjoyably diverting...

What works for Christopher Guest's dedicated comedy troupe (and it doesn't always work) isn't so easy to imitate, especially with actors lacking in basic improv skills.

As is typical of many weddings, the planning drags, and so does the movie.

While the situations are pretty funny and the actors are committed, they're not ripe with hilarity.

A textbook example of what happens When Improv Falls Flat.

... Confetti comes off more like a reality TV show, in which the participants just don't express their obsessive cluelessness as exquisitely as sharp writers can through trained actors.

Martin Freeman and Jessica Stevenson are unstoppably likeable. Confetti is a genuinely funny movie. Waiting for Guffman fans will love it.

Director Debbie Isitt's improvised mockumentary is reminiscent of Christopher Guest's movies but without the reservoir of comic invention [...] Still, there are nice moments and good performances [...]

Just when you think you've got Confetti completely pegged, it offers a surprise or two.

This film I'm afraid was absolute rubbish, the worst of British Comedy

Weird of three wedding couples in the competition. I dislike tennis and nudity couples because they look ridiculous in their wedding bliss.

This is what happens when there is literally no script,everthing improvised.

This is definitely one of the funniest movies I've seen all year. The style is Best in Show and A Mighty Wind; except it's made by Brits and is sometimes more outrageous and comically unpredictable. The film follows three couples in London who are in the process of getting married. Confetti magazine (a bridal mag) wants to pay for their weddings...if they can come up with the most creative concept. So, we meet a couple who wants a Broadway Melody-wedding; a couple who would adore a tennis-themed party; and another couple who want to be married in the nude (they're naturists.) What follows is a series of events that are both outrageous and extraordinary all at once. The performances are top-notch and delivered with such deadpan reassurance, that you wonder how these people got through the scenes with a straight face. Definitely check this one out on DVD (as I'm sure it's already gone from theatres.) And don't miss-out on one of the funniest comedies of the year.