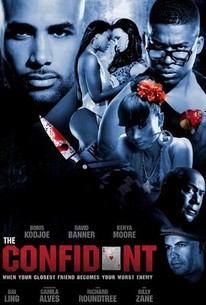 As written and directed by Alton Glass, this direct-to-video drama weaves the tale of childhood best friends who begin adulthood with bright prospects - as one stands on the cusp of a first round NFL draft pick, and one gleans a full art scholarship. Then conflict erupts, manifest in deceit, betrayal, homicide and a deadly vow that sends one of the men behind bars while the other prospers considerably. Then the convict friend obtains release - and will do anything he can to make good on an unpaid debt and reclaim the life that once lay before him.

Billy Zane
as Monty
View All

Critic Reviews for The Confidant

Ultimately doesn't work, with the audience rooting interest so clearly skewed against its purported hero.

Audience Reviews for The Confidant

There are no featured audience reviews yet. Click the link below to see what others say about The Confidant!