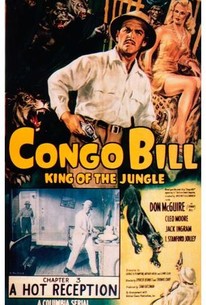 Yet another comic strip character -- Whitney Ellsworth's Congo Bill -- reached the screens in serial form courtesy of Columbia Pictures' penny-pinching Sam Katzman. But this intrepid jungle hero broke no new ground, to put it mildly. Played by a mustached Don McGuire -- a B-movie actor lacking somewhat in the charisma department -- Congo Bill again used the tired old plot about the search for a white Jungle Goddess, this time the possible heir to a 500,000-dollar trust fund. McGuire does manage to find the girl -- played by buxom Cleo Moore, who later gained fame in several exploitative film noirs of the 1950s -- but only after surviving attacks from a killer gorilla, an assortment of thugs, a runaway boulder, a shooting, and a stabbing, plus various other perils, none of them too exciting. ~ Hans J. Wollstein, Rovi

I. Stanford Jolley
as Bernie McGraw

There are no critic reviews yet for Congo Bill. Keep checking Rotten Tomatoes for updates!

There are no featured reviews for Congo Bill at this time.