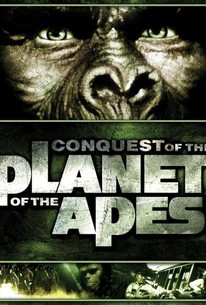 Critics Consensus: Conquest of the Planet of the Apes is as angry and relevant as any of its predecessors, but budget constraints and a stale script rob this revolution of the scope it requires.

Critic Consensus: Conquest of the Planet of the Apes is as angry and relevant as any of its predecessors, but budget constraints and a stale script rob this revolution of the scope it requires.

Conquest Of The Planet Of The Apes Photos

The fourth Planet of the Apes film is set in 1991, 20 years since the assassination of talking, time-traveling apes Cornelius and Zira at the end of Escape From the Planet of the Apes. The couple's infant son, Caesar (Roddy McDowall), has grown to adulthood in the care of kindly circus owner Armando (Ricardo Montalban). Meanwhile, a plague has wiped all dogs and cats from the face of the Earth; speechless primitive apes have therefore been domesticated and turned into first pets, then servants of humankind. Caesar becomes outraged at the treatment of these simian slaves and accidentally reveals his powers of speech in front of the militaristic authorities, who kill Armando when he tries to protect his friend's identity. His cover blown, Caesar kick-starts a revolution that pits chimps against humans, paving the way for eventual ape ascendency. Caesar was the second of McDowall's three Planet of the Apes characters; he also portrayed Cornelius in the first and third films and Galen in the short-lived 1974 television series. After taking over the franchise with this picture, Hollywood veteran J. Lee Thompson would become the only director to helm two Planet of the Apes films when he returned for the fifth and final installment. ~ Brian J. Dillard, Rovi

Hector Soucy
as Ape with Chain

News & Interviews for Conquest Of The Planet Of The Apes

View All Conquest Of The Planet Of The Apes News

Critic Reviews for Conquest Of The Planet Of The Apes

The Planet of the Apes series takes an angry turn in the fourth entry.

J. Lee Thompson's direction furiously propels the action in a compact chromium-and-glass setting -- and wait till you see that last battle royal.

If you are ready to thrill to the fall of civilisation (for the third time in this series), then there are worse ways to spend an afternoon. Just don't expect much humour.

I'm tempted to comment that reports of the Hollywood film's death have been exaggerated. It is alive and well and flourishing on the Planet of the Apes.

The darkest and most violent chapter in a series that had fairly distinguished itself already with its dark subject matter and disturbing imagery.

It's a mean, oppressive film that feels exhaustively claustrophobic, its action centered on a sterile city block and scattered, computer-soaked offices and labs.

A hard-edged thriller featuring a sleekly sinister look and a disturbing tone that's quite different from any of the other films in the series.

The best of the series. Apes in modern day (well, modern for then). Like all great sci-fi, has moral implications.

Audience Reviews for Conquest Of The Planet Of The Apes

Taking place 20 years after the third film, we are shown the evolution of the apes from pets to savages and the eventual takeover of the human race. With terrible camerawork and and a very oddly written screenplay, "Conquest of the Planet of the Apes" is one of the weaker entries in the series, but also has the best climax of them all. The final 30 minutes will have you on the edge of your seat the whole way through and I loved every minute of it. However, the first hour is a complete mess and pretty much ruins everything set up in the previous film. As far as mixed bags go, this is one of the most enjoyable, because they knew when to hit the audience hard, even though they failed miserably in other regards. Overall, it's not the best film, but I really enjoyed where it went. It is recommendable for the finale.

The son of Cornelius and Zira is separated from his protector and confronts a world where apes have been trained to do menial labour for the human race in slavery and promotes bloody insurrection amongst his kind. The third sequel to the classic Planet Of The Apes was butchered by the studio for its theatrical release no doubt because a nervous establishment weren't too happy at the sight of bloody revolution in the name of civil rights in the USA of the early 1970s. Much of the violence ended up on the cutting room floor and a terrible "and they all lived happily ever after" alternate ending was cheaply tacked on, essentially gutting the entire message of the story. In its original form, Conquest is a stirring story of bigotry, cruelty and fascism overthrown by civil disobedience and it contains some great moments of poignant dialogue and political argument. Unfortunately, thanks to the small budget and weak, TV standard direction it concentrates on its weaknesses instead of its strengths making for a finale that's little more than a gang of men in monkey suits running around hitting each other with sticks. The new prequel, Rise Of The Planet Of The Apes actually takes the seeds of the story and make much better use of them and so although this is an interesting period piece the new film is far more worthy of your time.

In Escape From the Planet of the Apes, Cornelius and Zira arrived from the future and had a child, one who was destined to destroy the future of human civilization. To protect her child from human treachery, the baby chimpanzee was switched with a normal zoo chimp by his mother, and grew up under the protection of his benevolent human master Armando, the extravagant sideshow circus entertainer ironically played by Ricardo Montalban from Star Trek II: The Wrath of Khan. Having been given a taste of freedom by the compassionate Armando, the talking simian chimpanzee Caesar (played by Roddy MacDowall who had the unique opportunity to play the son of his character Cornelius) becomes disillusioned when Armando brings him into the city only to learn that his ape brothers and sisters have become "domesticated" after a plague brought back from space in the year 1983 wiped out every dog and cat on the planet. Because of their adept intelligence and human-like faculties, the apes quickly became trained to serve their "superior" human masters. In 1991, human civilization is controlled by an oppressive authoritarian government fearful that a race of talking apes will inevitably rise up and destroy human civilization as foretold by the arrival of Cornelius and Zira. Now the apes have supplanted humans as working class slaves distinguished by the two dominant ape species... the smarter chimpanzees wearing green worker overalls and the stronger and more aggressive gorillas in red, not unlike the delineation between white and blue collar human laborers. When Armando and the son of Cornelius witness a cruel public display of torture against a helpless ape worker, the emotionally enraged talking simian lets loose his tongue and makes the fatal mistake of publicly shouting out an obscenity against the human oppressors. Armando, accepting the responsibility for the outcry, is taken into custody for questioning after he helps Caesar flee capture. The fugitive ape conceals himself by infiltrating a cage of "immigrant" ape orangutangs imported from Indonesia and is taken to a worker conditioning center where apes are harshly trained to become subservient to human domination. He is soon sold at a slave auction to the Governor's assistant MacDonald, who ironically is an Afro-American. MacDonald brings him before the Governor, played by the melodramatically camp Don Murray, who suspects that he is indeed the talking ape that they are searching for and is given the opportunity to name himself by choosing a name randomly from a book. The intelligent ape points to a name which not only surprises but confirms the Governor's suspicion and thus, Caesar is born. Caesar is put to work in an operations center where he can be closely monitored. When Caesar overhears that his master Armando was killed trying to flee interrogation, he becomes outraged and communicates non-verbally with his ape brethren to be defiant against their masters and the seeds of discontent are sown. Caesar organizes the apes into an uprising against their human captors that erupts into a full-blown ape revolt akin to Che Gorilla --- a sly reference to the Cuban revolutionary guerrilla leader Che Guevara for which Caesar emblematically bares an uncanny symbolic resemblance to and has even been parodied as such in pop-culture. Roddy MacDowall gives a rousing and unforgettable dramatic performance that surpasses his characterization of Cornelius in the three previous Ape films. Conquest of the Planet of the Apes explodes into a riotous and violent action packed climax that inevitably sets the stage for the entire Apes Saga and the birth of The Planet of the Apes. Conquest is the fourth film in the series and it is my second favorite. It is brutally violent and was the first Apes film to earn a PG rating after explicit scenes of graphic violence were cut. It is filled with so many socio-political themes that are just as relevant (if not more so) today as they were back in 1972. While the ape revolt was patterned directly after the 1965 Los Angeles Watts Riots, it could easily parallel the racial Alabama and Chicago civil protest riots of the 50's and 60's or the L.A. riots of the 90's. It's themes of working class oppression not dissimilar to the current issue of Immigration Reform which saw demonstrations of protest in major cities across the country by tens of thousands of immigrant workers who perform low-paying laborious and menial jobs that middle-class American workers think are socially beneath themselves by right of entitlement, as exemplified by the scene where Caesar witnesses the temperament of a snobbish blonde woman having her hair done in a salon by a chimp named Zelda and throws a tantrum when she messes it up which just nails the self-centered materialistic attitudes of our upper and middle social classes perfectly. The Government is portrayed as oppressive and paranoid and is an interesting examination of how the need for social constructs like Ape Management (i.e. Homeland Security) can easily deteriorate into an oppressive state of authoritarian control. Conquest is a political-charged cautionary allegory of how society breeds contempt.

Conquest Of The Planet Of The Apes Quotes