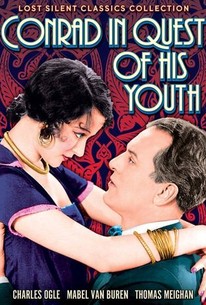 This film is an example of why writer/director William DeMille was so often overshadowed by his younger brother Cecil. Conrad in Quest of His Youth was a popular novel by Leonard Merrick, and its simple, human theme was perfect for the elder DeMille's personable style. After serving in India, Captain Conrad Warrener (Thomas Meighan) returns home to England and his non-existent social life. His loneliness only serves to make him more conscious of approaching middle age, and he goes on a futile search to recapture the lost days of his youth. First he calls on his cousins (Mabel Van Buren, Maym Kelso, and Bertram Johns) to join him for a weekend up at the country home where they used to spend their summers as youngsters. But to his dismay, he finds that his relatives prefer adult pleasures to childlike play. Next he goes to Italy and tracks down Mrs. Adaile (Kathlyn Williams), the older woman who captured his heart when he was 17 (incidentally, Conrad as a teen is played by a 25-year-old Edward Sutherland). She has held onto her looks, but ultimately she is too wise to buy into his foolish quest for his past. Finally, feeling old and broken down (although he's only about 37), he heads to a seaside town. There he gets mixed up with an acting troupe that has been stranded and falls in love with one of the actresses, Rosalind (Margaret Loomis). This exhilarating romance finally brings back his vitality. But Rosalind isn't really part of the troupe, she's the Countess of Darlington, who has been visiting an old girlfriend. When Conrad finally discovers her true identity, however, it matters not a whit, and the couple are happily united. Brother Cecil's sophisticated bedroom farces and high budget spectaculars grabbed headlines and big box office, but they rarely had the charm of this wonderfully warm movie.

Critic Reviews for Conrad in Quest of His Youth

There are no critic reviews yet for Conrad in Quest of His Youth. Keep checking Rotten Tomatoes for updates!

There are no featured reviews for Conrad in Quest of His Youth at this time.

Conrad in Quest of His Youth Quotes