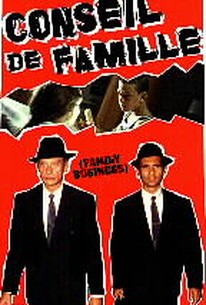 Renowned director Constantin Costa-Gavras (whose 1969's feature Z won multiple international awards and was a box office success) tries his hand at an unusual mix of comedy and crime in this story. When a father (Johnny Hallyday) gets out of prison, he comes home to his wife (Fanny Ardant) and two teen-age kids to pick up where he left off. That is to say, he intends to raise his kids right and continue burglarizing his way into the easy life. He joins up again with his old partner Faucon (Guy Marchand), but early on Papa's wily son cons him into making him a partner too. The years go by, and just when the family seems poised for the big time, an obstacle pops up from a totally unexpected sector. ~ Eleanor Mannikka, Rovi

Johnny Hallyday
as The Father

Fanny Ardant
as The Mother

Remi Martin
as Francois as an Adult

Laurent Romor
as Francois as a Teen

Juliette Rennes
as Martine as a Child

Caroline Pochon
as Martine as a Teen

There are no critic reviews yet for Conseil De Famille. Keep checking Rotten Tomatoes for updates!

There are no featured reviews for Conseil De Famille at this time.