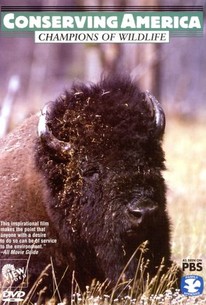 Produced by WQED and the National Wildlife Federation, this film looks at grassroots efforts by ordinary people to save American wildlife and habitats. With gorgeous footage of animals and landscapes, the film celebrates the efforts of conservationists of all ages and backgrounds. The viewer goes with narrator Burgess Meredeth to meet Montana's Children for Wildlife, a group of kids who monitor an eagle's nest for the Forest Service and build platforms for loons. Featured also are a couple in Massachusetts who build nesting sites for ospreys; a lady who saves turtles in Texas; and an Oregon man who cares for orphaned bear cubs. This inspirational film makes the point that anyone with a desire to do so can be of service to the environment.

There are no critic reviews yet for Conserving America. Keep checking Rotten Tomatoes for updates!

There are no featured reviews for Conserving America at this time.