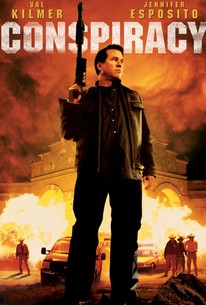 A wounded United States Marine discovers a corporate conspiracy designed to run illegal aliens out of an Arizona border town by any means necessary in this tense revenge thriller starring Val Kilmer, Jennifer Esposito, and Gary Cole. MacPherson (Kilmer) was one of the best soldiers in the United States Special Forces, but after being wounded on the battlefield he is deemed no longer fit for combat. Subsequently invited to join a former fellow solider on his sprawling Arizona ranch, MacPherson reluctantly agrees. Upon arriving at the ranch, however, MacPherson is troubled to find that his friend has vanished, and that no one in town will admit to ever even knowing him. Later, as evidence of a malevolent corporate conspiracy comes to light, the former soldier decides to put his military training to good use back on the homefront. The men with the money are on a mission to rid this town of illegal immigrants even if it means resorting to murder, and MacPherson isn't about to let their heinous crimes go unpunished.

It's beyond dreadful. It's jaw-droppingly bad.

Perhaps the Seagals and Van Dammes of the world were too busy, so enter Val Kilmer, and he's going to tear your nuts clean off.

Melodramatic film that can be easily avoided. The summary of this film is highly inaccurate because it's not tense at all. Everyone had good Southern accents :3 It wasn't too bad, but not good either. Jay Jablonski really can't act, despite the good looks.

This movie made it's themes (war profiteering, corporate interests in government) seem too simple and black and white. As a movie itself, the acting wasn't great and the story didn't move along very smoothly.

Conspiracy is a thriller about a senior special operations officer for the US Marines who after being wounded in Iraq returns to the states and decides its time to retire once home he gets a phone call from a old army buddy asking him to come join him on a ranch out west once MacPherson shows up his friend is nowhere to be found and no one in the town even says he lived there thats when MacPherson believes there is something far more shady going on in this small town and decides to investigate finding out there is much more going on then first seen. Ok action movie but wasnt meant for someone like Val Kilmer who takes the lead here slow moving at times so this one is stuck in the middle and wont be for everyone watch at your own risk

Not a bad explosive, action-packed thriller of the former Special Ops sniper becomes determined to find out the truth of what happened to his Marine friend. Val Kilmer is quite fine in his action scenes like Jean-Claude Van Damme, Dolph Lundgren and Steven Seagel.