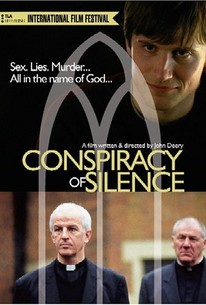 Gay Byrne
as Himself

Critic Reviews for Conspiracy of Silence

Isn't quite up to the task of intelligently advocating for change.

The need to portray the powers-that-be at all levels -- from the Vatican to the local parish -- in the worst possible light intrudes upon the movie, making it feel like a personal vendetta.

Certainly a debate over the church's tradition of an unmarried clergy ... could be a good and worthy one. But a quick, clumsy melodrama -- complete with awkward, pop-scored sex scenes -- isn't the best venue.

While the subject of enforced priestly celibacy is important, here it is dealt with in a workman-like manner lacking vibrancy.

Deery's points are well-taken, but they would have been a lot better made if he hadn't taken so many easy shots at the church by demonizing its local authorities.

Catholic nay-sayers will probably have a field day with the movie, but most would be better served by any one of the numerous documentaries that cover the same topic.

The kind of film that has its heart in the right place: exposing corruption. But it loses credibility by doing so in a melodramatic way.

[A] fervent yet scattershot film.

Conspiracy of Silence is well-meaning but has has no faith in its audience.

Though Conspiracy of Silence misses a chance at being a first-rate drama, it sheds much-needed light on an area that the mainstream press has mysteriously abandoned.

Audience Reviews for Conspiracy of Silence

Interesting insights into the cloistered life of priests. The movie examines the concept of celibacy in the Roman Catholic Church, showing the hypocritical, political, and detrimental effects it has on them. Good cast. Decently done.