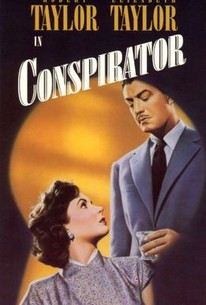 Elizabeth Taylor played her first grown-up romantic lead in the Anglo-American melodrama Conspirator. Taylor portrays Melinda Greyton, the new bride of highly respected Major Michael Curraugh (Robert Taylor). It comes as quite a jolt when Melinda learns that her husband is actually a spy for the communists (ironically, Robert Taylor had been one of the friendliest of friendly witnesses during the HUAC hearings.) Much of the film takes place in a picturesque Welsh village, an unusual setting for a tense espionage yarn. Reversing the usual MGM "tailor the story to the stars" formula, the storyline in Conspirator is sometimes more compelling than its leading players. Still, Liz Taylor acquitted herself nicely, proving that she'd have little difficulty tackling meaty dramatic roles in future films.

Nicholas Bruce
as Alek
View All

In the unfolding of the major theme the story lacks dramatic intensity, and little effort is made to justify the action of the central character.

The anguish of a young wife who discovers that her husband is a Soviet spy becomes an occasion of torment for all of us before the Capitol's new film runs its course.

Maybe no one could make this dialogue sound like anything but a drama school student saying "How now, brown cow" for the first time.

A depressing film that might have made more sense with a screenplay by someone like Graham Greene.

Elizabeth Taylor is amazingly lovely in this but the picture itself is rather ordinary.