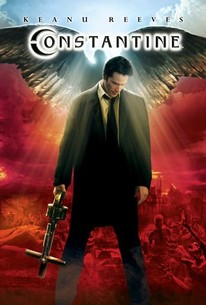 Critics Consensus: Despite solid production values and an intriguing premise, Constantine lacks the focus of another spiritual shoot-em-up: The Matrix.

Critics Consensus: Despite solid production values and an intriguing premise, Constantine lacks the focus of another spiritual shoot-em-up: The Matrix.

Critic Consensus: Despite solid production values and an intriguing premise, Constantine lacks the focus of another spiritual shoot-em-up: The Matrix.

An ordinary man with an extraordinary gift must save the planet from evil in this action-packed fantasy. Unknown to most people, the world is crowded with spirits both good and evil who walk among us in human guise. One of the few who can see these spirits is John Constantine (Keanu Reeves), but the responsibility of his vision is more than he can stand, and he tries to kill himself. Saved from death, Constantine must now atone for his actions by acting as a guardian in the middle ground between Paradise and Hell. Constantine also makes the acquaintance of Angela Dodson (Rachel Weisz), a police detective who becomes aware of his unusual gift while looking into the death of her sister; he leads her into the unknown world of the spirits and soon circumstances demand that they join forces in a desperate bid to save humanity from evil. Constantine also features Tilda Swinton, Peter Stormare, and Gavin Rossdale, the latter best known as the lead singer of the rock group Bush. Michelle Monaghan (Made of Honor) was originally in the film (cast as a half-breed demon) but director Francis Lawrence cut her scenes. ~ Mark Deming, Rovi

Visuals and attitude -- not for kids.

Blazes few new trails and bogs down in a confusing narrative muddle.

I deeply loathe the Heaven-and-Hell genre to which this cinematic comic-book spectacular belongs.

Halfway through Constantine, a fully clad Keanu Reeves steps into a shallow pail of water, sits on a chair next to it and holds a cat in his lap.

A handful of scenes depicting the high temperatures on the devil's home turf are plausibly horrific, but the rest barely registers.

Constantine deserves a cult following and should be remembered for all the things it did right instead of its perceived wrongs.

Keanu Reeves seems to be trapped in the Matrix.

Most of the script consists of speeches explaining too many intricate rules of supernatural battles between good and evil. Even the cast seems bored.

Constantine gives the impression of somber shadows, but it's too dingily distracting to leave a bleak impression.

The comic adaption scores with perfect casting for the minor characters and a very unsettling atmosphere. Of course there is a little much CGI at times, but the result is still very entertaining. If only this film had even more Tilda Swinton scenes.

Prime example of a film that should have been much better than what is presented on-screen. The film tries to be far too ambitious than what it actually is, and in the long run, it loses track of its ideas and it ends up being a ridiculous mediocre outing. The film could have been quite good considering some of its ideas, but overall, it never becomes anything watchable and the cast here just deliver bland, over the top performances which make you lose interest. I really wanted to enjoy the film, and I went into this one with an open mind, unfortunately, this film was a letdown. The concept had the potential of being a great film going affair, but this was a poorly executed movie that quickly loses its spark of energy, and it tends to rely more on its visuals to make things engaging for the viewer. The power of a good film lies in its ability to tell a great story, but with Constantine, we don't have that vibe whatsoever, and it just ends up being a waste of time. I really wanted to enjoy it, but couldn't as there were too many lacking ideas in the film to really make it a watchable affair. Constantine is a mediocre film, a visual feat that is hollow in its story, yet tries too hard at grabbing your attention with a good sense of visuals, which is pretty much what this delivers in. Constantine is a mediocre film that is more ridiculous than anything, and it should have been much better than this.

John Constantine is trying to save his soul by hunting down and "deporting" demons who intrude on human affairs when he stumbles across a psychic whom the son of The Devil intends to use to escape from Hell. Keanu Reeves revisits Neo as the chain smoking anti-hero of Constantine, a film that can be thought of as "The Matrixorcist". It's a comic book adaptation that blends religious mythology with superhero conceits and the format of Noir thrillers. Since The X-Files, this idea has been done a hundred times, but rarely so well; the plot is a lot more involving than most of this type of thing, Constantine is a far more interesting central character than that of the usual super hero schtick and the mythology is used very creatively. The visual effects are also great having a really nice interpretation of Hell which looks like those old videos of nuclear blast zones and the quality cast (including Pruitt Taylor as Constanine's alcoholic priest side kick, Tilda Swinton as Angel Gabriel and Peter Stormare's wonderfully creepy Satan) draw you into this dark underworld of demons and angels. Stylish, inventive and with a lot of atmosphere, Constantine still stands up as one of the best films of its type. If you're a fan of Guillermo Del Toro then you should definitely check it out.

What do you figure the chances are for my last two movies to both feature automatic crucifix firearms? Well, I watched this piece of Hollywood blasphemy just before dropping Jodorowsky's Holy Mountain. Hmm..., maybe there is a God.