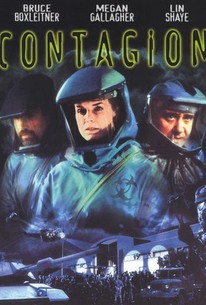 Known as The Last Breath on cable TV and Epidemic abroad, this contemporary technothriller was filmed in 2001 under the title Contagion. When the President of the United States (Bruce Boxleitner) is struck by a poisoned dart, a shadowy terrorist claims that the Chief Executive has been infected with a lethal virus, for which the terrorist has the only antidote. As frenzied negotations proceed between the Government and the assailant, virologist Dr. Diane Landis (Megan Gallagher) races against time to save the President's life and avoid a worldwide crisis, with or without the aid of the typically uncooperative Secret Service. Even though the basic situation is fraught with thrills and terror, somehow or other the film climaxes with an out-of-left field cliffhanger involving a child in jeaopardy. Withheld from release in the wake of the Anthrax scares attending the terrorist attack of September 11, 2001, Contagion was finally seen by American viewers courtesy of the Lifetime network on October 7, 2003.

There are no critic reviews yet for Contagion. Keep checking Rotten Tomatoes for updates!

There are no featured audience reviews yet. Click the link below to see what others say about Contagion!