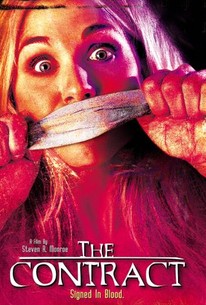 A woman blowing off steam after a bad day inadvertently signs out a death warrant on a number of people close to her in this suspense drama. Anna (Camilla Overbye Roos) has not been having a good time of it lately: she's been chewed out by her boss, she's had an argument with her best friend, her husband keeps making eyes at a waitress, she's been having trouble with her babysitter, and even the checker at the supermarket is giving her static. Decidedly unhappy, Anna stops by a neighborhood bar and has a few cocktails; after the alcohol has gone to her head, she starts discussing her problems with a mysterious stranger who tells her he can do something about all the people who are bothering her if she'll simply sign her name on a cocktail napkin. Anna does so, and promptly forgets about it, waking up the next morning with an industrial-strength hangover. However, a few days later Anna's boss is killed, and over the next few days several other people with whom Anna was cross start dropping like flies. Anna realizes that the mysterious stranger had her sign out a contract on everyone who wronged her, and now she must find him before anyone else dies -- or he comes back to murder her and close the circle. The Contract also features Jeff Fahey, Louise Fletcher, Andrew Keegan, and Amy Weber.

There are no critic reviews yet for Contract. Keep checking Rotten Tomatoes for updates!

There are no featured reviews for Contract at this time.