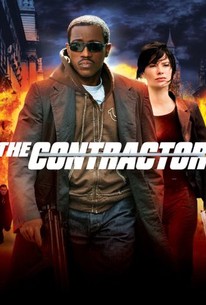 Wesley Snipes plays an ex-assassin set up by his old bosses and pursued through London in this action thriller. Former sniper James Dial (Snipes) has carried around the ghosts of his last botched job ever since he failed to kill the leader of a worldwide terrorist group. After leaving the business and enduring a long exile in Montana, word gets out that the British government are holding the same terrorist in captivity; Dial is wooed back via the opportunity to make good on his initial failure. What Dial doesn't know is that he'll soon be framed for murder, putting him on the run in London's underbelly with the British police hot on his heels. Alone and distrustful, Dial claims only one ally: a twelve-year-old girl who aids him in hunting down proof of his innocence.

Ryan McCluskey
as Purcell
View All

Critic Reviews for The Contractor

There's little to recommend here beyond Snipes always being an enjoyable watch and the accidental casting coup of future Game Of Thrones stars in supporting rolls.

Audience Reviews for The Contractor

I really enoyed this movie, its excting, entertaining with fantastic explosions, gun fights and a pretty descent storyline to be honest. This movie keeps you compelled to watch it with a great cast especialy lena headey who givees a brilliant performance. Its about a contractor killer from america who is broght out of retirement to do one last killing but unbeknowns to hi hes being set up, he travels to london to hit his target but in doing so he has the london metropoleton police and the american police afeter him. this takes you on a thrill ride of bullets really worth a watch!

A fine Wesley Snipes explosive action-thriller like between The Shooter and The Professional.

Poor effort and a low budget movie was to blame here. The storyline is kinda missing & Wesley was not at he's best...

When is Wesley Snipes coming back to the silver screen? This one was okay but for me a disappointment for such a talented actor. I wish that someone would throw him an Oscar worthy script! Get this as your buy one get on free one form your video distributor...add a star if you get it!