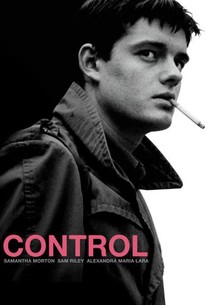 Critics Consensus: Control is a work of art, thanks to its evocative black and white cinematography and sensational performances from Sam Riley and Samantha Morton. Even those not familiar with Joy Division can still appreciate the beauty of the film.

Critics Consensus: Control is a work of art, thanks to its evocative black and white cinematography and sensational performances from Sam Riley and Samantha Morton. Even those not familiar with Joy Division can still appreciate the beauty of the film.

Critic Consensus: Control is a work of art, thanks to its evocative black and white cinematography and sensational performances from Sam Riley and Samantha Morton. Even those not familiar with Joy Division can still appreciate the beauty of the film.

Ian Curtis has aspirations beyond the trappings of small town life in 1970s England. Wanting to emulate his musical heroes, such as David Bowie and Iggy Pop, he joins a band, and his musical ambition begins to thrive. Soon though, the everyday fears and emotions, that fuel his music, slowly begin to eat away at him. Married young, with a daughter, he is distracted from his family commitments by a new love and the growing expectations of his band, Joy Division. The strain manifests itself in his health. With epilepsy adding to his guilt and depression, desperation takes hold. Surrendering to the weight on his shoulders, Ian's tortured soul consumes him.

John Cooper Clarke
as Himself

Mark Jardine
as Other Band Manager

The film leaves you with the impression of an almost painfully innocent young singer, for whom alienation was, alas, far more than a pose.

Ian's trapped between insurrection and guilt, and so is Corbijn's film which mires itself in the artist's bourgeoisie dramas without figuring out how they influenced his music.

Sam Riley is fascinating as Curtis, a hypersensitive young man hobbled by his incurable disease, and Samantha Morton is poignant as his put-upon wife.

Control is easily one of the finest films ever made about the collision of music, madness, and the human heart.

The film nails both the malaise and creative vigor of Curtis' short, bruised and chillingly relatable life.

Riley should have been nominated for an Oscar; his work here is on par with that year's er, Daniel Day Lewis...

On a certain level, Corbijn's approach to filmmaking reminds me of Gus Van Sant's loose take on Kurt Cobain.

This film owes its power to a refusal to overplay its die-young, stay-pretty ending, and a scary good turn by Sam Reilly, channeling Ian Curtis.

Sam Riley is a revelation in the lead role in what is one of the outstanding British films of the year.

The film overcomes the central miscasting of Samantha Morton.

The way Ian Curtis blocked his onstage movement mirrored isolationism in his home life. He clasped the microphone stand like a drowning man would a life preserver, but he couldn't stay afloat in dreary waters of his own creation. A seamless rock biopic.

Good movie. I never knew too much about the lead singer of this band, only that it he had a sad life. This movie really did well painting a life full of struggles, and difficulties. It is a shame that he died so young.

For every icon, there is an unknown predecessor who paves the way. Before there was Kurt Cobain, there was Ian Curtis, lead singer of the post-punk band, Joy Division. 27 years after his tragic death, Curtis' incredible contribution to music is finally being recognized in Anton Corbijn's film, "Control." It's only fitting that Corbijn serve as director since it was his early photographs of Joy Division that reflected the band's dark, introspective songs. Corbijn went on to photograph and direct videos for such musical greats as U2, David Bowie, Depeche Mode, R.E.M. and Metallica. With his first feature film, Corbijn avoids the pitfalls of many music video directors who inundate us with flashy and unnecessary edits and camera angles. Instead, he lets the stark black and white of the film tell the story of a lead singer tortured by epilepsy, guilt, depression and suicidal thoughts. The use of black and white also captures the factory town of Manchester, England in the late 1970s, a city crumbling under industrial and economic stress. Manchester has since rebounded and is once again thriving. Curtis is played by relative newcomer, Sam Riley, who's quiet and unassuming approach portrays an artist inspired by his heroes, David Bowie and Iggy Pop. At a chance meeting following a Sex Pistols concert, Curtis bonds with three fellow musicians to form the band. As Joy Division begins to flourish, Ian's relationship with his young wife, Deborah, continues to distance itself. Academy Award nominee, Samantha Morton plays the confused wife trying to understand her husband's depressed soul. The film is based on Deborah Curtis' autobiography, "Touching From A Distance", so it comes as a surprise that Morton's character does not have more scenes in the movie. The key to Control is understanding Curtis' depression, which the film accomplishes to near perfection. As he battles epilepsy, the young singer lives in constant fear that his next seizure will be his last. His only option is to swallow a daily cocktail of prescription drugs with side effects so terrible, that most of us would rather tempt fate than endure the aftermath of the pills. Ian's spirit is also tortured by overwhelming guilt brought on by an extra-marital affair with a part-time journalist, played by Romanian-born Alexandra Maria Lara. The most telling scene comes when Ian records an in-studio track for the song "Isolation." While Curtis stoically sings into the microphone, his band mates are distracted with the normal banter that typically occurs in a studio. "Mother, I tried, please believe me. I'm doing the best that I can. I'm ashamed of the things I've been put through. I'm ashamed of the person I am." The lyrics seem to fall on deaf ears except for those of the sound engineer who refers to it as "genius." But Ian's brilliance is also a desperate cry for help ignored by everyone in the studio. The 27-year-old Riley does an excellent job of capturing Curtis' aloofness on stage. Singers such as Jim Morrison, Kurt Cobain and even the early years of Michael Stipe would often drift into the moment of the song. But when Curtis performed, he immersed himself into his own world where the music simply served as the soundtrack. Riley skillfully draws us into Ian's dark world with a range of subtle head movements and facial expressions to a whirling explosion of arm gyrations that came to personify the singer's stage performances. Overwhelmed with grief, shame and depression, Ian finally succumbs to his demons at the young age of 23. He left behind a wife, a child and a musical legacy that is finally receiving its just rewards nearly three decades later. For those looking for a story solely about Joy Division, Control may not be for you. But for those seeking an intuitive perspective into the anguished spirit of one of the most influential alternative bands in history, you will certainly find it in this depressing but incredibly beautiful film.

I generally don't do biopics because they're either not very interesting or very true to life but this, the rise and fall of Ian Curtis is an expertly made film directed by Anton Corbijn, Depeche Mode's long-time collaborator. It's a somewhat bleak yet touching tribute to the soul of Joy Division and Sam Riley does a bang up job as Ian with the rest of the cast holding their own as well.

A little slow moving, but this biopic of Joy Division?s front man Ian Curtis' life is realistic with some enjoyable performances. I don?t claim to be a Joy Division fan and therefore can?t comment on the accuracy shown by the Actors in this film. For me though Samantha Morton really stood out in this. Worth the watch, but fairly drawn out.