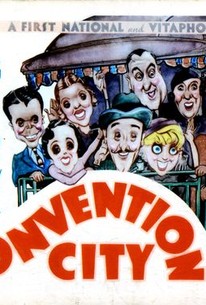 Practically every member of the Warner Bros. stock company except Glenda Farrell shows up in the rowdy, raunchy pre-Code comedy Convention City. Joan Blondell plays Nancy Lorraine, an enterprising lass who is employed by a big-city hotel as a "hostess" for out-of-town conventioneers. She spends a great deal of the film in the company of small-town businessman George Ellerbe (Guy Kibbee), who goes to great lengths to avoid his nagging wife (Ruth Donnelly). Weaving in and out of the proceedings are inveterate practical jokers Goodwin (Frank McHugh) and Hotstetter (Hugh Herbert), who use the convention as an excuse for a three-day binge. The plot rears its ugly head when Nancy finds her affections torn between slick CEO T.R. Kent (Adolphe Menjou) and handsome young salesman Jerry Ford (Dick Powell). The New York Times described it as, "Not a dull foot. One of the few comedies that can truthfully be called positive entertainment." Unfortunately, there are no known surviving prints of Convention City, so it remains one of the era's many "lost films."

Frank McHugh
as Will Goodwin

Its humor is not gentle nor its lines polite, but it is so badly funny and true to its theme that despite Its frequent roughness there is nothing to do but loin the laugh parade and enjoy Its wildness to the end.

The piece is fast and because of clever acting, humorous in spots. But the average observer doesn't find wholesale inebriation an amusing sight -- and this film specializes in scenes depicting imbibers before, after, and while taking.

The feature picture is highly entertaining it is Convention City and contains a cast of funsters that will keep you smiling most of the time and laughing out loud often.

One of the most hilarious scenes is provided by Frank McHugh and Hugh Herbert, In which they get themselves happily and helplessly "lit," and there are others sufficiently bright to make Convention City a sprightly affair.

In the numerous assemblage, all the actors perform in characteristic style, Miss Astor perhaps impressing exceptionally by her brisk delineation of a saleswoman.

Too much happens in Convention City to be recorded here. Let it merely be said that a perfectly chosen cast keeps things bubbling with mirth at all points.

Archie Mayo, the director, establishes an almost unbelievably furious tempo at the outset and the cast never lets him down.

The show is predominantly geared for laughter, yet it offers novel romance and a little light drama. Every one of the players is a character study and every separate bit of entertainment is a source of new interest.

The novel plot deftly covers a dozen different stories. And every one is filled with glamour, excitement and hilarious surprises.

All of the above and more of the same are presented in such a ridiculous, but at bottom faithful, light that Convention City, while possibly over the heads of the casual mob, should delight the critical and the discriminating no end.

There are no featured reviews for Convention City at this time.