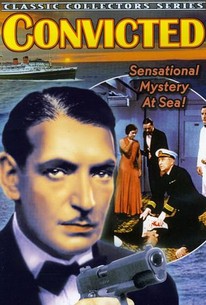 Seldom was there a less appropriately named film company than Artclass Pictures, a firm which specialized in the lowest of low-budget productions. In Artclass's Convicted, silent-film favorite Aileen Pringle plays Barbara Norvelle, a stage actress who is being ardently pursued all over an ocean liner by her "sugar daddy" John Blair (Richard Tucker). Not long after being turned down for the umpteenth time by Barbara, Blair is found murdered, and the thousands of dollars that he has absconded with from his company appears to have been stolen. Not surprisingly, Barbara is accused of the murder, but a sharp-eyed reporter (Jameson Thomas) suspects that someone else was responsible. He's right, but it takes him the rest of the picture (all 55 minutes' worth) to prove it.

Harry Meyers
as Sturgeon
View All

There are no critic reviews yet for Convicted. Keep checking Rotten Tomatoes for updates!

There are no featured reviews for Convicted at this time.