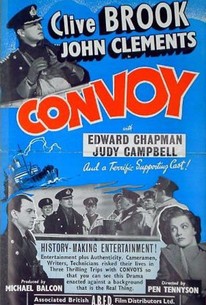 Clive Brook heads the cast of this low-key British war film. Brook plays the skipper of a tiny English cruiser, performing convoy duty in the north seas. A German battleship targets the cruiser for a deadly game of cat and mouse. Just when it seems that Brook and his crew will be blown out of the water, a battle squadron comes to the rescue. One of the first World War II combat films, Convoy features future stars Stewart Granger and Michael Wilding in very minor roles.

Albert Lieven
as Commander of U-37

George Benson
as Parker
View All

There are no critic reviews yet for Convoy. Keep checking Rotten Tomatoes for updates!

There are no featured audience reviews yet. Click the link below to see what others say about Convoy!