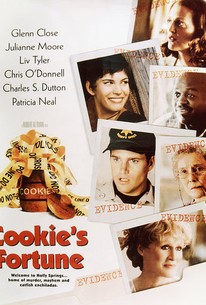 Critics Consensus: Robert Altman's gift for diffuse storytelling is employed to breezily enjoyable effect in Cookie's Fortune, a mirthful caper that layers on a generous helping of Southern charm.

Critics Consensus: Robert Altman's gift for diffuse storytelling is employed to breezily enjoyable effect in Cookie's Fortune, a mirthful caper that layers on a generous helping of Southern charm.

Critic Consensus: Robert Altman's gift for diffuse storytelling is employed to breezily enjoyable effect in Cookie's Fortune, a mirthful caper that layers on a generous helping of Southern charm.

The ingredients of an archetypal southern town (the blues, catfish, and scrabble), a deliciously chosen cast, and the creative skills of Robert Altman make for a wonderfully engaging film that adds to the accolades that have distinguished his outstanding career. Delectably combining farce, moral passion play, and social drama with a soupcon of mystery/suspense, Altman drives us to his grandly executed finale with a constantly inventive comedic theatricality. Generations of the Orcutt family have inhabited the sleepy Mississippi town of Holly Springs. Headed by the aging Jewel Mae (Pat Neal), and composed of her two nieces, the domineering Camille (Glenn Close) and the somewhat-mindless Cora (Julianne Moore), and Cora's rebellious daughter (Liv Tyler), only recently returned home, the family is a fairly dysfunctional lot. The nieces basically ignore their aunt, and the mother and daughter avoid speaking to each other. Jewel is watched over by her middle-aged black caretaker (Charles Dutton), but she misses her recently departed husband, Buck, and contemplates joining him in the hereafter. When Jewel finally decides to pull the trigger, Camille stumbles into the situation and plots a coverup that rapidly spins out of control. Close is near perfect as the singleminded southern dame who brooks no interference with her willful desires, whether she's directing the town's Easter play, Salome, or pushing her way through police tape. The police chief and deputies, out-of-town investigators, and a stately patrician lawyer are the final touches in an exuberant allegory that is simultaneously touching, contemporary, and delightfully cathartic.

Courtney B. Vance
as Otis Tucker

Kenny Pillow
as Soldier No. 1

Derek Guyer
as Soldier No. 2

This isn't great Altman but it's fun Altman.

Most of what transpires is low-key, affectionate comedy and a fair amount of fun.

Cookie's Fortune is a wittily diagrammed portrait of a small town shaken to its roots by this deceptive calamity. The movie, though, never really becomes more than a diagram.

The deceptively modest Cookie's Fortune may or not be Robert Altman's best film in years, but it is certainly his most pleasurable.

What's so distinctively charming is the easygoing tone, which manages to turn black comedy into a strangely gentle, touching and delicate affair.

The old energy and bite may be lacking, but at least this lazy, amiable shaggy-dog story was made in the same freewheeling, idiosyncratic way as Altman's best work.

This is black comedy light, but you'll catch the undercurrent of ingrained racism in the hands of Glenn Close's villainess character Camille Dixon.

This serio comedy about an eccentric Southern family is a minor work in Altman's oeuvre, but it's well acted and enjoyable.

Despite several silly twists near the end, the acting is quite charming.

Despite some lovely performances (though, sad to say, Patricia Neal's isn't one of them) and charming moments, this meandering ensemble piece and its Tennessee Williams-ish finale is oddly out of character.

[An] earthy, gently comic tale of death and family dysfunction.

Nothing amazing but a solid small town dramedy/mystery that's well acted and amusing. I haven't seen most of Altman's work before but this seems very much his style from what I've seen.

This isn't Altman's best, but having said that Altman is also easily one of my favourite directors - so even when he is not at his best, he never fails to entertain. And entertaining this is, a quirky, very Southern comedy with endearing characters. Julianne Moore is hilarious as the slightly loopy sister, Glenn Close is simply superb in her over-the-top performance. Unfortunately, Liv Tyler is almost equally as bad as the others are great. The story sometimes is not as smooth as it could be, but the eccentric characters and the atmosphere of a small Southern town is what makes this a great and fun film.