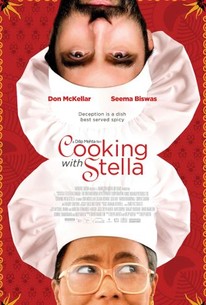 A woman who has learned a few things about taking care of herself runs the risk of having her tricks found out in this comedy-drama. Stella (Seema Biswas) works as a domestic in New Delhi and has used her fluency in English and skills as a cook to wrangle a job as housekeeper for Canada's ambassador to India. While she's well liked by her employers, they don't know that she's been submitting padded expense reports for years and pocketing the difference; she also regularly raids the cupboards to sell quality foods at a discount to others. However, Stella's schemes may be a thing of the past with the arrival of new ambassador Maya (Lisa Ray). Maya's husband Michael (Don McKellar) stays home to look after their young daughter, and cooks as a hobby; he's fond of Indian food, and insists that Stella give him lessons in preparing the local cuisine. With the man of the house a frequent presence in the kitchen, Stella finds scamming her employers is not nearly so easy, especially since she and Michael get along so well. Matters become all the more complicated when Maya and Michael hire a nanny, Tannu (Shriya Saran), who is an especially devout Hindu girl. Cooking With Stella was the first fiction feature from director Dilip Mehta. ~ Mark Deming, Rovi

Fatima
as Old Woman in Park

Anurag Arora
as Constable in Market

Biplob Borekakoh
as Man in Market

Critic Reviews for Cooking with Stella

[An] unexceptional comedy that resembles Deepa's Canadian-Indian hybrids such as Bollywood/Hollywood rather than the heartfelt social-conscience dramas Water and Earth.

Meant to be a funny clash of cultures but, suddenly and with scant warning, it turns into a confused clamour of genres.

Biswas aside, performances are uninspired and director Dilip Mehta mars his third act with a moralising ending that's neither plausible or earned.

A subtle social comedy with an upstairs/downstairs sort of flavour.

There are no featured reviews for Cooking with Stella at this time.