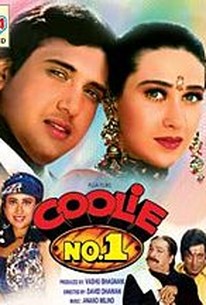 Raju (Govinda) an ordinary coolie working at a city bus-stand is desperately in search of a bride so that he can settle down in life. Meanwhile, Choudhry Hoshiarchand Shikarpuri Baroodwala (KaderKhan), a wealthy man, showers insults upon Shadiram Gharjode (Sadashiv Amrapurkar), a match-maker, over the fact that he brings poorpeople to seek his daughter Malti's (Karishma Kapoor) hand in marriage. Shadiram vows that Choudhry will marry off his daughters to none other than ordinary men.Fate has it that Shadiram comes across Raju coolie and shows him a picture of Malti as a potential bride... love at first sight. Raju, his friend Deepak (Harish), who is a car mechanic, and Shadiram travel in disguise to woo Malti. Raju poses as the rich Kuwar Mahinder Pratap of Singapore while Deepak and Shadiram disguise themselves as his driver and manager respectively. News of the arrival of these wealthy personalities in the village soon spreads to Choudhry and he starts fantasizing about the marriage of his daughter Malti with this Kuwar saab. Attraction builds between Kuwar and Malti, and also between Deepak and Choudhry's other daughter Shalini (Kanchan). Eventually Kuwar/Raju is married to Malti, but he must return to his normal life and weave a web of lies in order to keep Malti and her father fooled. He rents a big mansion that belongs to a wealthy businessman (Kulbhushan Kharbanda) and claims it to be one of his own. When Choudhry pays his daughter a visit he notices Kuwar/Raju working as a coolie at the bus-stand and suspects he has been conned. Raju starts a new web of lies where he has to lead the double life of Kuwar Mahinder Pratap as well as of Raju coolie the futile twin of Kuwar. Meanwhile, Raju witnesses a murder attempt on Kulbhushan Kharbanda at his mansion and Raju is framed and sent to prison. This again causes Choudhry to put two and two together and he fears Raju has been with both his daughters because his second daughter is pregnant. Choudhry takes Shalini to a hospital to get rid of the baby, but Deepak knows that it is his. Deepak and Raju again disguise themselves, this time as female nurses from Singapore to get entry into the hospital. Coincidently, it is the same hospital where Kulbhushan Kharbanda is recuperating from his murder attempt and at the same time that the culprits attempt to re-assassinate the man. Raju and Deepak participate in a thrilling chase and a fight which land the real perpetrators in jail. Impressed by their courage in saving his life, Kulbhushan Kharbanda gifts away his mansion to Raju and Deepak, and claims them as his children, thus making them automatic millionaires. Choudhry is pleased his daughters have millionaire husbands and learns a lesson from Shadiram that the happiness of his daughters is more important.

Critic Reviews for Coolie No. 1

There are no critic reviews yet for Coolie No. 1. Keep checking Rotten Tomatoes for updates!

There are no featured reviews for Coolie No. 1 at this time.