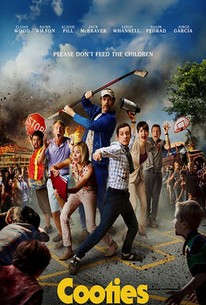 Critics Consensus: A horror-comedy without enough of either, Cooties is fatally content to skate by on its intriguingly oddball premise.

Critics Consensus: A horror-comedy without enough of either, Cooties is fatally content to skate by on its intriguingly oddball premise.

Critic Consensus: A horror-comedy without enough of either, Cooties is fatally content to skate by on its intriguingly oddball premise.

When a cafeteria food virus turns elementary school children into killer zombies, a group of misfit teachers must band together to escape the playground carnage. The film stars Elijah Wood (The Hobbit, Lord of the Rings), Rainn Wilson ("The Office"), and Alison Pill ("The Newsroom") as teachers who fight to survive the mayhem while hilariously bickering in an uncomfortable love triangle on the worst Monday of their lives. -- (C) Lionsgate Premiere

Sunny May Allison
as Shelly

I honestly have no clue who this film is for. Whoever they are, they're likely to walk out of the theater wanting a refund.

A midnight movie for those fine with dozing off about twenty minutes in, once the charm of its single sentence log-line has worn off.

While directors Jonathan Milott and Cary Murnion want to have their laughs and horror, too, the film is something of a zombie itself: half-alive and bloody, but lacking any heart.

With "Cooties," what starts as recess fades all too rapidly into movie detention.

It's not really funny enough to achieve grown-up cachet, and it's too ugly and violent for younger viewers.

What could have been an amusing and entertaining zombie flick is, instead, a slog.

People straight up react badly when you kill kids.

Gory and hilarious and occasionally terrifying.

Cooties is fine if you want to watch a movie about elementary school kids getting bludgeoned with fire extinguishers and then set ablaze.

Cooties has its problems, but for fans of the genre, it's mostly good bloody fun.

It's too bad-Cooties has promise as a premise but the end result is just a mess.

Cooties never quite decides if it is aimed at children or adults.

Be afraid, be very afraid. Cooties are contagious, and they can kill. At least, in this shonky, low on budget, high on stupid comedy. Cooties is firmly in the spirit of splatter comedy horror, but certainly feels far too familiar, lacking the heart and personality of better entries in the canon. Cynics will cry foul, but for fans of the genre there is stuff to enjoy; the high splatter rate, the pop culture gags and a willing cast of fodder for the meat grinder all give this a passing grade - only just.

Sue me, but I thought this film was quite a bit of fun, all things considered. I'm not here to suggest that this is an amazing horror/comedy, because it's not, but I think that both the professional and audience reactions to this film sort of underrate how much fun the film is to actually watch. And I'm not even suggesting that the professional and audience scores are wrong, but I just think that the film, in a lot of respects, didn't really get a fair shot. Either because they were being compared to some of the classics in the horror/comedy genre or, as the consensus on here states, there's not a good enough of either comedy or horror in the film. I have to completely disagree with the latter, because I think the film did about as good a job as is possible in balancing the horror and comedic aspects of the film. I'm not saying that either of these are great or mind-blowing, but the film finds a good balance between the two that, I think, is really hard to achieve for a lot of people. I think the fact that you had two screenwriters, Ian Brennan and Leigh Whannell, who specialized in comedy and horror, respectively, so I think that they definitely learned a lot from each other's respective style of writing. Usually, when two people coming from completely different stylistic backgrounds get together to write, there's certain inconsistencies and tonal shifts depending on who wrote which particular part of the film. Not in this one, while it had two writers, it still feels like a movie with one vision, not two different visions of two different writers who don't mesh well together. So that was cool. And, of course, no review of this film would be complete without mentioning how great the cast is. As far as horror films go, this might have one of the better casts of 2015. The only one, out of the entire teachers, that I was unfamiliar with was Nasim Pedrad, she's done SNL, but she more than held her own and clearly has an eye for improv if the special features on the DVD are to be trusted. I don't mean to suggest that the characters themselves are all that complex, but I think the cast clearly had a blast filming this and, as always, I think that's really important in a film like this. It just makes the film more entertaining to watch. I will say that I did like how Clint/Wade/Lucy love triangle played out and not necessarily in the way one would expect. And the horror is real solid as well. There's nothing that scary here, but there's some good tension built up and the zombie kids, while you can probably take one at a time, when they swarm you then they become viable threats, at least for what the film is trying to accomplish. So thumbs up for that. I thought the writing was solid. Not excellent, or anything, but still solid and does a great job at highlight the cast's talents. I wouldn't say this movie was really good, I don't think it really did reach that level, but i had a hell of a time watching this movie. I enjoyed it so much more than the rating would ever imply. So yea, I know not everyone will like this movie, as evidenced by the reception, but I had a blast watching this so, to me, this is an easy recommendation as a rental. Fun movie here.

A neat premise brought by a solid cast with a couple clever quirks, that is WOEFULLY underdeveloped.

Crazy little film that is funny but terribly uneven. Wilson steals the show from wood and when the film should be getting its groove on it settles into the melodramtic, which does not work.