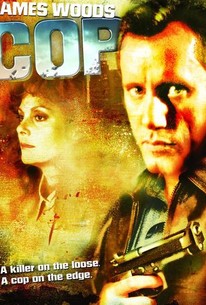 A workaholic detective (James Woods) is relentless in tracking down a serial killer responsible for the murder of introverted women. Luckily, he has the help of his mentor in the department (Charles Durning). The film is based on the novel by James Ellroy, Blood on the Moon.

Jimmy Woodard
as Robber
View All

Far and away the best thing about it is Mr. Woods, who served as co-producer and demonstrates a clear understanding of what makes great movie detectives great.

Woods was born to play this role.

The finale is so unresolved that the film practically insists that the important aspect is the journey, not the outcome.

Woods takes us on a singularly unpleasant ride, but it is always an insightful and fascinating one.

A lurid police procedural with James Woods at his manic best.

Another tour-de-force for James Woods

This violent drama will do little to improve the public's understanding of the men in blue.

Cop might have worked better if it had been a 20 minute movie.

James Woods does his thing, and it's a lot of fun to behold.

To start out here I will have to say that this may just be the best adaptation of a James Ellroy book to hit the screen. Cop is not a dense, labyrinthine crime epic in the vein of LA Confidential and The Black Dahlia (both of which failed, Black Dahlia much more so, in the almost Herculean task of transposing Ellroy's words onto the screen). Cop combines elements of the rogue cop, police procedural and serial killer genres into an uncut little gem of a neo noir crime film. The other reason it works so well is the casting of James Woods, who in the eighties had the market covered for hard-boiled sleazy burnt-outs, as the central character, Detective Sergeant Lloyd Hopkins. Cop is based on Blood on the Moon, the first of three books featuring the character of Hopkins Ellroy wrote in the mid eighties. It's been a while since I've read Blood on the Moon so I've forgotten many of the differences. Certainly, I recall the ending of the film is different to Ellroy's book. The film opens with the discovery of a mutilated body in an LA apartment building. Hopkins is first on the scene and the only clues are a blood-smeared book of radical feminist poetry called Rage in the Womb and a stack of newspapers with the same advertisement for a swinger party circled in red. The newspaper adverts lead him to blonde bombshell, Joanie Pratt, "former actress, model, singer, dancer and what usually follows", who admits she was helping the murdered woman, Julie Niemeyer, research the swinger scene. When a letter written in human blood turns up in Niemeyer's PO Box, Hopkins pulls the files on all unsolved LA homicides going back several years. It's not long before he deduces he's dealing with a serial killer. The link between his victims: they were all innocent. It's the one thing his born again Christian commander does not want to hear. Serial killers "panic the public and embarrasses the department" he tells Hopkins. There's also the matter of Hopkins' well-known reputation for having "a hair up his ass" about murdered women. Hopkins demands additional men and resources to find the killer or he'll go to the media, then storms out of the commander's office. Undeterred, Hopkins fronts a Sheriff's deputy, Delbert 'Whitey' Haines, who discovered two of the bodies Hopkins suspects were victims of the serial killer. Hopkins creeps Haines' pad and finds marijuana, S&M gear, guns, and a wire that someone has been using to secretly tape Haines and his attempts to extort gay hustlers, including one called Birdman, for drugs and money. Next he checks out women's bookstores for leads on the bloodstained tome of feminist poetry found at scene of the Nieymeyer killing. Despite their obvious differences, he and the owner of one of these stores, 'Ms' Kathleen McCarthy, a tense, chain-smoking anti-police feminist strike up a rapport. He takes her to a party full of LAPD brass instead of his wife (who has left him by now) and talking to her later that night discovers that she is still recovering from a rape that occurred in the last year of her high school. She also tells him since that time fifteen years ago, someone has been anonymously sending her flowers. When Hopkins notices photos of Haines and another student nick named Birdman in McCarthy's senior Year Book, his suspicions are further raised. He breaks into McCarthy's house and finds that the flowers, which she has kept pressed in glass, correspond to the dates on the women he suspects were victims of the serial killer were murdered. From here the body and sleaze count ratchets up considerably. The killer murders Pratt, sending Hopkins' commander incriminating photos of Hopkins and the woman having sex in the kitchen. Birdman is the next to be murdered, after we see him get in a car after soliciting the driver for sex, and Hopkins shoots Haines after forcing a confession from him that and Birdman were responsible for raping McCarthy. Watching Cop now is like viewing a primer on how to do an eighties crime film. The look is washed out, the sound track comprises heavy synthesiser interspersed with wailing sax, and there's lots of badly dressed cops in houndstooth jackets. The studio behind Cop were reportedly concerned that it would be seen as a slasher movie when what they wanted was something more like Dirty Harry. They ended up with both. Cop came before Silence of the Lambs had made serial killers acceptable for mainstream audiences (although Michael Mann's Manhunter, a far better film, was released in 1986), and the plot was one of the earlier iterations of the 'cop-goes-AWOL-in-order-to-hunt-down-serial-killer-no-else-believes-exists' story. The material is well handled, the film managing to capture the frenetic pace of Ellroy's writing and the great dialogue. Salvador, Once Upon a Time in America, Videodrome and much under-rated Best Seller, were all under Wood's belt when he did Cop, and he's at his reptilian best as Hopkins, a womanising sociopath who doesn't just cut corners to get what he wants; he'll smash down the entire building. He's the kind of policeman that, completely unprovoked, kills a suspect and gets his partner, Dutch, (Charles Durning) to deal with the consequences while he hits on the dead guy's girlfriend. "You blow away a broad's date, the least you can do is drive her home," Hopkins tells Dutch. Indeed, director James B Harris, who also wrote the screenplay, doesn't baulk at depicting Hopkins at his worst. This includes showing the Hopkins' barely constrained boredom, snatching glances at his watch, as McCarthy opens up to him about her life. Assisting Woods is a great cast of supporting actors, including Charles Haid as Sheriff Delbert Whitey Haines, Durning and Lesley Ann Warren as the feminist bookstore owner, Kathleen McCarthy, who makes her otherwise stero-typed character almost believable. One of the best of the genre. Check it out.

The good news is this is James Woods at his cynical best delivering some great lines. The bad news is the murder-mystery story is jumbled, confusing and will make you yell out loud (like I did) "That's it?!" when the end of the film comes to an abrupt halt. Still Woods was born for the role and plays it to the hilt.

James Woods plays an unconventional cop on the trail of a serial killer in this purely by the numbers thriller from the 80s. In fact the script shows just as little imagination as the title; it's so formulaic it borders on the absurd. Burnt out cop who doesn't play by the rules, chewed out by his captain, internal affairs investigation, vicious serial killer yadda yadda yadda. There's nothing here we haven't seen a million times before. It's not as trashy and gratuitously violent as many mainstream 80s thrillers, but it's unpleasantly sleazy, Woods' character comes across as a wholly unsympathetic and self centred ass-hole, and Lesley-Anne Warren's so-called feminist is so sappy and naive you just want to shake some sense into her. Add the usual mix of B-movie stalwarts in the supporting cast and you have a typical Channel 5 afternoon TV movie with more swearing. Give it a miss.