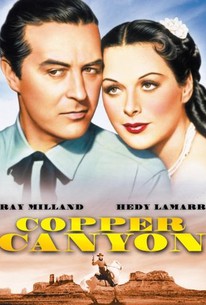 Set just after the close of the Civil War, a former Confederate officer (Ray Milland) joins a vaudeville target-shooting show to avoid detection by the Union army. Working his way West, he falls in league with a group of Southern copper-miners being harassed as they try to make a living.

Stuart Holmes
as Barber/Townsman
View All

There are no critic reviews yet for Copper Canyon. Keep checking Rotten Tomatoes for updates!

The casting of the English Milland and the Viennese Lamarr in a story set in the american west is a bit of a head scratcher but the film is a pleasant enough diversion. There are some stiff performances, Mona Freeman in particular but the color photography is gorgeous as is Hedy. An enjoyable picture but unremarkable.