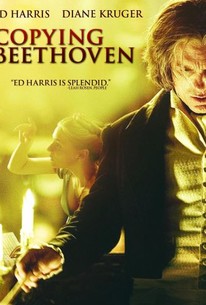 When a young Vienna Music Conservatory student and aspiring composer accepts a job as a copyist for Ludwig von Beethoven, she soon finds her destiny forever interlinked with that of the legendary classical musician in director Agnieszka Holland's romantic period drama. Beethoven (Ed Harris)'s "Ninth Symphony" is about to make its historical debut, but Beethoven's publisher Herr Schlemmer is dying of cancer. Now in desperate need of a copyist to complete the score, the ailing Schlemmer enlists the aid of ambitious student Anna Holz (Diane Kruger); who readily accepts the job despite an explicit warning that the composer is a callous wretch. As Anna begins the arduous process of copying Beethoven's career-defining work, her soul-stirring kindness causes the composer to view their collaboration as a blessing that will enable him to produce some of the most sublime music ever created. When Anna works up the courage to show Beethoven some of her own work, however, his thoughtless derision of the composition causes his sensitive assistant to abandon their current collaboration. Subsequently determined to flee Vienna and marry her devoted paramour Martin, Anna is quickly tracked down by Beethoven and forced to choose between love and duty. ~ Jason Buchanan, Rovi

László Áron
as Judge
View All

You can mock this film if you like, but it remains watchable throughout. And the ears have it when the eyes don't.

If the composer's shade could hear the words this script has put in his mouth it really would be a case of "roll over, Beethoven", right there in his grave.

A great example of that time-honoured genre, the biopic so silly it plays like a spoof.

A fatuous, bafflingly imagined tale of the unhappy and unwell Beethoven and his ordeal in preparing the Ninth Symphony for its premiere.

Diane Kruger is the most appealing scenery in this rose-tinted nonsense.

Stuck between Kruger's blankness and Harris's overemoting, the film never finds a balance.

The once promising Polish director Agnieszka Holland ("Olivier, Olivier") stumbles with this muddled story about Anna Holtz (Diane Kruger), a 23-year-old composition student sent to 1824 Vienna to transcribe sheet music for the demanding and cruel Ludwig

It's the kind of movie made purely for acting awards, which is really unfair to audiences who deserve at least some story for their money.

As wooden as a piano stool.

Ed Harris does the unimaginable to save this film. I believe Agnieszka Holland was intelligent to have chosen to develop only so much of Beethoven's life, instead of stuffing it all into one film (she chose the time during which he premiered the Ninth Symphony); still, the film has some very serious flaws: Diane Kruger as a feminist aspiring composer who works as Beethoven's unlikely copyist: miscast. Dizzying "experimental" hand-held camera work. Rather superficial, anachronical storyline... the script does have a few clever moments, though, some phrases Beethoven delivers are wonderful, but the rest pretty much fall into cliché. What is most angering is that it could have functioned perfectly: a great lead actor, much greater source material, spot-on period art direction... and yet again, the fault is of the substance. It's a real shame. The writers came up with a blatantly fictionalized account of the composer's later days, in which he becomes emotionally involved -more like emotionally connected- with a promising composer who becomes his copyist and then his nurse, cleaning lady, and friend. We all know about other fictionalized biopics like Amadeus, films that distort the truth. The thing is that Amadeus made me swallow its story, shoved it down my throat and got me involved: what it showed, I considered it as true as anything else on celluloid. CB seems unsure... it's just so obvious that it's false! And that's not good. If they don't buy it, how could I? It's hard to explain. I believed every word Ed Harris spoke in the same way I'm sure a lot of people felt involved with F. Murray Abraham in Milos Forman's film. But all the other characters, just... the situations, everything, seemed so made of cardboard, so... fictional. It's hard to explain. I don't mean Copying Beethoven is unwatchable, there is one particular scene in which it's all about the music... it plays rather like a music video, but it's fantastic, epic, and one can only wish that the rest of the film was that good. It's an inspired, electrifying ode to the symphony itself... and all I could really think about as I watched it was Alex De Large on his bed, and the snake by his side, and his face... Lovely lovely Ludwig Van! lol. Unfortunately, it seems to me that the film suffered a great deal from having such an exciting scene right in the middle of it, because the dull parts that came later looked even worse. If only they could cut that scene out and market it as a short film... they would have received much better reviews, and they would have said all they appeared to want to say.

I was lucky enough to watch this movie way back in the summer (it just recently became available for review on Flixster.) The cut I saw was allegedly a "rough-cut" that would require some more editing and tinkering-with (depending on audience input and feedback.) I must say, though, that the version we all saw way back in June seemed very much complete and painted a splendid picture of a film that was well-developed, cast and directed. Ed Harris gave a brilliant performance as the troubled composer. The film may be seen as rehash (how many Beethoven films can there be?, etc.), but Harris' performance alone is what solidifies this movie as and makes it stand out from, say, Immortal Beloved; in which Gary Oldham's portrayal was a bit more off-putting and creepy. Diane Kruger also gives a noteworthy performance as Beethoven's composing assistant. She brings a resilience to a character that shouldn't even exist, given the sexist divisions and gender role issues that existed in that era. The film is shot beautifully and its cinematography is brilliant. The art direction gushes with lush sets and decor and the score is very much appropriate for a movie in which a score should not overpower the music that its subject matter is directly dealing with (in this case Beethoven's own compositions.) Ed Harris definitely deserves an Oscar nomination for Best Actor (although it probably won't happen.) Definitely catch it if you can. It's worth searching for it.

I can't give this one star. What a tremendous story! But what horrific casting. Seriously, the person in charge of casting should be drawn and quartered -- and I wouldn't even wish that on Mel Gibson. If only John Cusack had been at the meeting, with some kind of pen or a blunt instrument, where they picked the casting director, things could have been so much different.

I don't want to do a blow-by-blow with this, but I want to suggest one "remake" change, for the future. If Ben Kingsley is still available when they do this again -- and because it's a great story, they should --, I want him cast as Wenzel Schlemmer. This "actor" is the most egregiously cloying of the bunch. If Kingsley can't do it, I vote for Tom Hulce. For either one, the Oscar for best supporting actor would be assured, and you can't beat the symmetry -- my own strange notion of symmetry -- of this idea.

Flixsters, this one is a definite pass until they get it right.