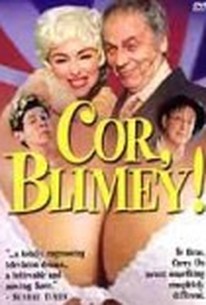 Starting with Carry on Sergeant in 1958 and continuing on to Carry on Columbus in 1992, the "Carry on" series were among the most popular and best-loved film comedies in Great Britain, combining broad slapstick humor and risqué wink-and-nudge farce. Bubbly blonde Barbara Windsor and double entendre master Sidney James were two of the key members of the stock company which starred in the many "Carry On" pictures. They also shared a stormy love affair which began during the filming of Carry on Cleo in 1964 and continued, on and off, until James died of a heart attack in 1976. Cor Blimey! is a feature made for British television, based on Barbara Windsor's memoirs, which traces the ups and down of their secret romance. Samantha Spiro plays Barbara Windsor, Geoffrey Hutchings appears as Sidney James, Adam Godley portrays their frequent co-star Kenneth Williams, and Barbara Windsor also makes a brief appearance as herself. ~ Mark Deming, Rovi

I was particularly tickled by the uncomplicated Eddie, a bouncer hired by Barbara's underworld husband to keep an elephantine eye on Sid.

I can imagine that "Carry On" fans will be delighted to see their favorite stars being lovingly portrayed in this behind the scenes journey of Pinewood Studios.

There are no featured reviews for Cor Blimey! at this time.