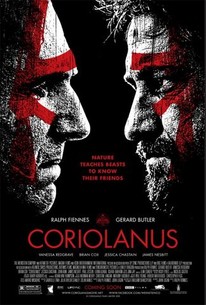 Critics Consensus: Visceral and visually striking, Ralph Fiennes' Coriolanus proves Shakespeare can still be both electrifying and relevant in a modern context.

Critics Consensus: Visceral and visually striking, Ralph Fiennes' Coriolanus proves Shakespeare can still be both electrifying and relevant in a modern context.

Critic Consensus: Visceral and visually striking, Ralph Fiennes' Coriolanus proves Shakespeare can still be both electrifying and relevant in a modern context.

Caius Martius 'Coriolanus' (Ralph Fiennes), a revered and feared Roman General is at odds with the city of Rome and his fellow citizens. Pushed by his controlling and ambitious mother Volumnia (Vanessa Redgrave) to seek the exalted and powerful position of Consul, he is loath to ingratiate himself with the masses whose votes he needs in order to secure the office. When the public refuses to support him, Coriolanus's anger prompts a riot that culminates in his expulsion from Rome. The banished hero then allies himself with his sworn enemy Tullus Aufidius (Gerard Butler) to take his revenge on the city. -- (C) Weinstein Co

Bora Nenic
as Cleaner in Corridor

Coriolanus is a determinedly grim but smart, resonant film, faithful to the tone of the original, done with some skill and conviction.

It's genre writing that entertains while tapping into enduring truths.

The other actors do their best to help Fiennes define this curious anti-hero. Incapable of playing the role of peacetime compromiser, his Coriolanus comes across as a warrior who simply can't function without a war.

The film has fifth-act problems, as did the play, but Fiennes' bleak overview should leave receptive viewers feeling daunted and haunted.

The play's inherent difficulties notwithstanding, Coriolanus, the movie, is a perfectly sound achievement.

Fiennes leads a cast that, at least in the major roles, is uniformly powerful.

For those who take elemental pleasure from hearing Shakespeare's beautiful verse delivered this well, your evening will be well spent, and as a piece of drama, Coriolanus still packs a punch.

This is a manifesto not for fascism, but for hating human beings in general.

It's creative yet difficult to understand, and definitely not for general audiences, who are likely only to digest the visual violence.

Fieness has chosen and used the material well.

While not a Shakespeare buff, I was drawn into Fiennes' directing debut, and found this modern update to be well worth watching.

Fiennes gives an explosive performance however the movie leaves a bitter taste. Modern day view of a Shakespearean play which i felt didn't really work. Visually stunning but fails where it actually matters.

An anti-democratic Roman general battles a rival general and later creates a public relations nightmare. It's been almost two decades since I've seen or read Shakespeare's Coriolanus, so it's difficult to remember how the film compares to the original material. What I can say is that I got more out of the film than I remember getting out of the play. Ralph Fiennes's direction is flawless. In Coriolanus he creates a film first and a Shakespeare film second. With short scenes, long establishing shots, and pregnant pauses between conversations and monologues, Fiennes uses all the techniques germane to film and relies on the rich text when its most needed; his balance of film and Shakespeare's words is better than most other adaptations. Fiennes's vision of Coriolanus fits our time and politics. Martius's open contempt of the proletariat contrasts with the successful patricians who, sharing his contempt, lie to the people to ingratiate themselves. Thus, Coriolanus becomes about how people in power manipulate the masses. Fiennes gives a masterful performance, at times gritty and murderous and at other times vulnerable and weepy. Gerard Butler keeps up, and that's the best I can say while seasoned veteran Vanessa Redgrave hits her role out of the park as one of the most bad-ass Shakespearean mothers. Overall, Coriolanus is a tour de force for Ralph Fiennes, a too-often underrated actor and director.

Nature Teaches Beasts to Know Their Friends Decent Shakesperian based movie! Shakespeare's dramas may well be set up in a contemporary set, because the content is timeless. Here the screenplay drama is performed in its original text. The old lines sometimes are in conflict with the modern outfit, but you are quickly caught back to the drama by the violent intrigues and you become strongly affected by the deep conflicts between power and love. The war scenes are realistic and bloody. It is exciting and the outcome uncertain for the uninitiated. Ralph Fiennes both directs and plays the title role and succeeds well. He has got a star team both in front and behind the camera. The film photo by Barry Ackroyd is brilliant. The set and costumes are next to perfection. The 74-year-old Vanessa Redgrave portrays Coriolanus' mother, Volumnia, powerful and convincing. Gerard Butler as the rebel leader acts with strong charisma and realism. Additional casting is also very good. Coriolanus is a tense and violent political wartime thriller which makes Shakespeare not only accessible but utterly captivating. A credible directorial debut from one of the industry's finest working actors. The citizens of Rome are hungry. Coriolanus, the hero of Rome, a great soldier and a man of inflexible self-belief despises the people. His extreme views ignite a mass riot. Rome is bloody. Manipulated and out-maneuvered by politicians and even his own mother Volumnia, Coriolanus is banished from Rome. He offers his life or his services to his sworn enemy Tullus Aufidius.

It`s Shakespeare meets The Hurt Locker. A tremendously entertaining and electrifying film. A stylish, lean, muscular and gripping modern drama that packs serious and intense punch of a hard-edge action-thriller. An unforgettable and powerful movie. A triumphant masterwork from Director-Star, Ralph Fiennes, he proves to be an extraordinary director. A fiery and rich directional debut. Fiennes gives an astonishing and passionate performance, his best yet. Gerard Butler is outstanding, one of his best performances so far. Butler and Fiennes have never been better, their performances are just simply a tour de force. The performances are truly top-notch from it`s amazing cast. Jessica Chastain is wonderful. Vanessa Redgrave is at her best. Brain Cox and James Nesbitt are excellent. A heart-pounding and exhilarating movie packed with explosive action and the breathtaking drama of Shakespeare`s words. It`s wickedly well-crafted and superbly performed film. A gorgeous, dark and bloody great movie. I loved this movie.