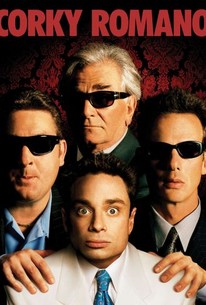 Saturday Night Live cast member Chris Kattan stars in this mob comedy as Corky Romano, a veterinarian with a penchant for pop music from the '80s. As a youth, Corky was kicked out of his Mafia-connected family for being an oddball. Now his long-lost father (Peter Falk) has been indicted and needs Corky to infiltrate the FBI and steal the government's evidence against him. Corky is willing to aid the relatives who so long ago turned their backs on him, but his brothers go overboard when intimidating the computer hacker who gets Corky's bogus application into the FBI academy, presenting him as a super agent named Pissant. Now Corky must live up to his reputation for an eminently qualified top cop while simultaneously trying to get the goods on his dad. Corky Romano co-stars Peter Berg, Chris Penn, Vincent Pastore, Vinessa Shaw, Fred Ward, and Richard Roundtree.

Kristina Simonds
as Woman in Classroom

Flora Burke
as Woman With Dog

Grant Silver
as Boy With Mouse

"Transformers" Find a Fox in Their Midst
"Saw" Producer Passes Away

Unlike the pathetic protagonists of many a smart dumb comedy, Corky never becomes sympathetic, and without this fundamental irony the movie doesn't have a leg to stand on.

Chris Kattan should have been in silent comedy. He has the Silly Putty face of those old slapstick stars, and a sing-song, splitting-headache vox box that would have played much better in the silents.

Ever hear about the guy who liked to pummel his head with a sledgehammer, because it felt so good when he stopped? Maybe the same fellow would appreciate Corky Romano.

Corky Romano, is the perfect antidote for what ails you. Although shallow and at times uneven, Saturday Night Live's ever-funny Chris Kattan as Corky, is an endearing goof-ball with a heart the size of Texas, guaranteed to make you smile.

Although Corky Romano is not based on a Saturday Night Live sketch, it is still as dismal.

Unfortunately, keeping Kattan in the forefront is also one of the main problems with the film.

Somebody, somewhere, actually believed in this dreck.

Will somebody please offer Peter Falk a decent role? This 'crotchety old geezer' gig is getting tiresome.

In terms of a bad comedy, Corky Romano is one of the worst films that you can watch. Poorly written acted and directed, this is one of those films that never should have been made in the first place. This is a film that is stupid, so bad that you cannot believe your eyes. This film is definitely not worth your time, and if you're looking for something good here, you won't find it. This is a failure as a comedy, one that is definitely not funny, but more stupid. There is nothing funny here, and the comedy is horrible. Corky Romano has an awful cast that really don't know how to create effectively funny material. The film just isn't interesting or fun to watch. I found it dull and boring and a total waste of time. If you're looking for something funny, you'll only find bad gags that are poorly executed. This is a bad film with a bad lead actor that has always delivered a mediocre performance. Chris Kattan is a horrible comic, and can't act whatsoever. I think that this is one of the worst comedies that I have seen in quite some time and it just doesn't work because the script is so poorly constructed that it makes you wonder how they succeeded in making this film. The film awful, not worth the time to watch and the cast are bad here. They simply don't have what it takes to deliver the laughs. Corky Romano is one of the most uninspired comedies that I've seen, and it just fails from start to finish.

i seriously dont know why i own this movie

Haha so bad its funny.