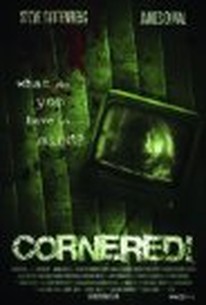 A Los Angeles liquor store owner and his friends are stalked by a serial killer during a late-night poker game in this grisly slasher film from first-time writer/director Daniel Maze. A voyeuristic madman is torturing the owners of inner-city convenience stores and stealing the security tapes for some sick thrills. Upon hearing that the reward for the maniac's capture is up to $500,000, liquor store owner Steve (Eduardo Garcia), beer delivery driver Morty (Steve Guttenberg), and their pals begin playfully speculating on what they would do to the killer if they caught him, and how they would spend the reward money. Later, after locking up the store, Steve and his friends Donny (Peter Story), Jimmy (James Duvall), Mona (Ellia English), and Jess (Elizabeth Nicole) settle in for their regular poker game. When one of the players goes missing, the rest of the group starts to panic and attempts to convince local transient Jacko (David Jean Thomas) to alert the authorities. But that plan fails when Jacko is butchered, and the terrified poker players realize that the killer is murdering each of them in the same way they said they would do away with him, and that it's only a matter of time before he discovers the lethal set of butcher's tools stockpiled in the basement of the store.

I got the impression Cornered! wanted to be a melding of Clerks and Scream, but all I wanted to do was scream "Get on with it!" and clock out early.

A smart, hilarious film with an incredible twist. I loved this film, all though it was slow paced at times. I demand a sequel!

Plot: A notorious serial killer wrecks havoc on a bunch of misfits who were discussing the different ways they would execute him not knowing he's in the midst of them listening! The story takes place in a grocery/liquor store where the owner and some friends play poker. One by one they check it out and never come back. We have the hallucinating drug addict who is suffering from heroin withdrawals with a phobia of cockroaches, a phone sex operator addicted to ice cream, a liquor store owner addicted to alcohol, a fat guy addicted to donuts, and a hot scantily clad hooker. Meanwhile the killer wears a mask with a zipper mouth and leather gloves as he attacks his victims. This is the kind of slasher film which will have many yelling at the screen "Don't go down there ALONE!" as the film is entirely focused on a single store, so that we experience the victims' terror and confusion as their friends disappear one by one.