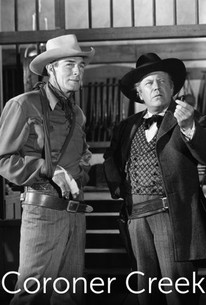 Randolph Scott is a single-minded gunman bent on tracking down and killing the white man responsible for an Indian raid on a stagecoach. Scott's fiancee was killed in the raid and a large army payroll was stolen. The villain is George Macready, a "solid citizen" with fingers in several dirty pies. The film's highlight is not the final confrontation with Macready but a brutal fistfight between Scott and minor heavy Forrest Tucker. Filmed in Cinecolor (a pleasing if limited two-color process), Coroner Creek was based on a novel by western specialist Luke Short.

There are no featured audience reviews yet. Click the link below to see what others say about Coroner Creek!