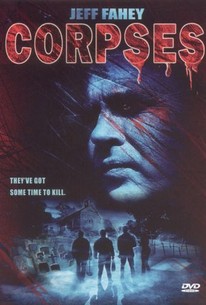 In this low-budget horror comedy, Jeff Fahey plays Captain Winston, a policeman investigating the illicit doings of a local mortician named Fred (Robert Donovan). Fred, it seems, has been experimenting with a chemical formula that brings dead bodies back to life. His latest version of the serum is successful, but there's a catch -- his revived corpses only stay alive for an hour at a time. But when a banker threatens to foreclose on his funeral parlor, the mortician is able to mobilize an army of the undead to do his bidding and get revenge. The mortician is soon using his charges to settle scores against a number of people he doesn't like, but when his assistant finds out, he realizes the mortician must be stopped. Corpses also stars Robert Donavan and Tiffany Shepis.

There are no critic reviews yet for Corpses. Keep checking Rotten Tomatoes for updates!

Quirky low-budget Zombie comedy. Not as funny as it tries to be and it all comes off a bit too silly, but there's a couple humourous moments. Acting isn't the best and the plot is unoriginal and stale. It's got a bit of gore, nothing too disgusting but it's satisfactory enough, as was the bare flesh on show courtesy of a couple of hotties. Poor film overall, but there was enough entertainment to see me through to the end.