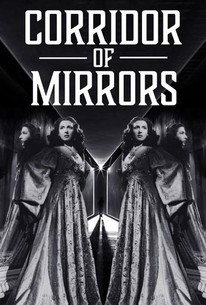 Based on a novel by Chris Massie, Corridor of Mirrors is a British attempt to match the poetry and lyricism of the French cinema of the late 1940s. Eric Portman plays a contemporary artist who tends to live in the past. He surrounds himself with Renaissance artwork, obsessed with the notion that he and his lady friend (Edana Romney) are reincarnations of the lovers in a centuries-old painting. Portman's delusions eventually lead to murder. Critical reaction to Corridor of Mirrors was split right down the middle: American critics found the film profound, while British commentators dismissed it as empty and ponderous. ~ Hal Erickson, Rovi

Gordon McLeod
as Prosecutor
View All

Critic Reviews for Corridor of Mirrors

It embraces its ridiculousness completely and draws power from owning up to just how insane it is.

Even if Corridor of Mirrors is ultimately insubstantial, that is also a part of its charm, and its strangeness. It might be odd, a little meandering, and occasionally incoherent, but then...that's what dreams are made of.

Here's a movie in which the thick atmosphere probably should have received star billing alongside the actors.

While the image looks rich, the sound is on the thick side, with an undertone of hiss. It's rather like the cotton left in your head after waking from a strong potion.

Even if you choke a bit on the story and its premise, you can enjoy this film's superb black and white cinematography by André Thomas, expressive soundtrack by Georges Auric, and fabulous art direction by Terence Verity.

Audience Reviews for Corridor of Mirrors

There are no featured audience reviews yet. Click the link below to see what others say about Corridor of Mirrors!