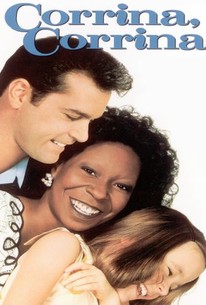 A housekeeper tries to break through the silence of a traumatized child in this touching comedy-drama featuring Whoopi Goldberg. The story, set during the 1950's, is a loose adaptation of the autobiographical experiences of writer/director Jessie Nelson. Manny Singer, who writes jingles at an ad agency, is devastated by his wife's abrupt death from cancer. To handle his grief he becomes deeply involved with his work. His 9-year old daughter Molly is even more devastated and has completely stopped talking. Her muteness worries Manny and he desperately searches for a maid that can care for her. After many interviews, he hires Corrina Washington, an educated, spunky, and slightly eccentric woman whom he thinks Molly will relate to. The woman and child do indeed gradually bond. Manny too is drawn to Corrina and they begin an interracial romance that was at times complicated by racism. The story does have an upbeat ending though.

Yonda Davis
as Woman in Audience

Bryan A. Robinson
as Chubby Boy

Corrina, Corrina has its heart in the right place, and its characters are some of the nicest people I've met at the movies lately, but the movie seems to exist under a cloud of gloom, and I kept hoping for sunshine.

Whoopi's great triumph is that she plays the kind of maid that has never been seen on the screen before...Whoopi's liberated maid is a symbolic payback of sorts for all those years of silver screen servitude for black actresses.

A preachy and manipulative tearjerkering melodrama that mishandles its pseudo-emotional longwindedness. Goldberg and Liotta derved better than this punctuated pap

Actually fairly entertaining in a boring sort of way.

Reveals that loyalty to life, not to time, is what heals those in deep grief.

A perfect little movie. A heartwarming story about the healing process, an impressive performance from a child actor, effective handling of a divisive issue (in this case, race and interracial relationships), and nice bits of music, from Manny's commercial jingles to his father's deaf violin-playing.

Movie about a broken family. A man's wife dies and he employs a housekeeper to help bring up his daughter. Good cast.

An OK movie. It is too bad that race matters. I thought the three main actors - Whoopi Goldberg, Ray Liotta and Tina Majorino (as Ray's kid) did a wonderful job.

Whoopi Goldberg plays a nanny to a girl who just lost her mother, in this well-done, enjoyable and fun movie. It's similar to her other movie "Clara's Heart" where she was a housekeeper to a little boy (Neil Patrick Harris), also a good movie. "Corrina, Corrina" works. The little girl (Tina Majorino) is sweet and believable, trying to overcome the loss of her mother. A bit awkward is the casting of Ray Liotta as the disturbed father.