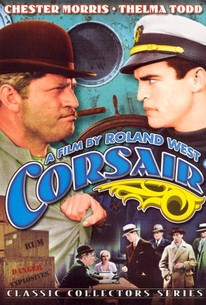 Crime is treated as "business as usual" in Corsair, though not one of the characters is anyone you'd like to do business with. Chester Morris plays a college jock whose pampered girl friend has been raised to expect the finer things in life. Unable to support the girl in the manner in which she is accustomed, Morris goes into the lucrative bootlegging business. As Morris gets deeper and deeper into the underworld, he becomes more of a heel. At the end he somewhat surprisingly emerges as the hero--and manages to escape from the cops, as do all the other criminal characters! The role of the rich girl in Corsair was played by Alison Loyd--better known as comedienne Thelma Todd. Ms. Todd was the lady friend of Corsair director Roland West, who felt he could transform Todd into a major dramatic actress by changing her name. By 1932 she was Thelma Todd again, clowning opposite ZaSu Pitts, the Marx Brothers and Laurel & Hardy.

Mayo Methot
as Sophie
View All

There are no critic reviews yet for Corsair. Keep checking Rotten Tomatoes for updates!

This is one of those movies you find in the dollar bin or on oldies.com. I'm sure it can be watched for free on imdb.com. Not a bad movie for being 78 years old. About a Harvard Quarterback who goes to work for his rich girlfriends dad, the dad wants him to collect valuable stock from a old lady in return for a worthless stock, he won't gets fired and he's out for revenge, so he starts rum running on the high seas, Pirating the Dads Liquor and then selling it back to him. Its not bad something to fill a void. 3 stars.