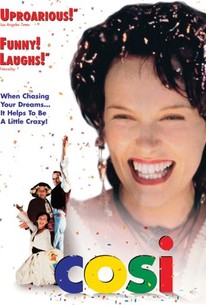 In this Australian comedy, adapted by Louis Nowra from his own play and updated from a '70s to a '90s setting, a Sydney slacker gets the chance to stage an opera, but his cast is assembled from the ranks of the mentally ill. After a long stretch sponging off his law-student girlfriend Lucy (Rachel Griffiths), college dropout Lewis (Ben Mendelsohn) fakes his way into a job doing occupational therapy with a group of asylum inmates. Although his original assignment is to stage a variety show, manic-depressive patient Roy (Barry Otto) soon hijacks the project and convinces Lewis to helm an adaptation of his favorite opera, Mozart's +Cosi Fan Tutti. Lewis' unlikely cast ranges from psycho firebug Doug (David Wenham) and scruffy loudmouth Sandra (Kerry Walker) to depressive, dirt-obsessed Ruth (Pamela Rabe) and self-effacing drug addict Julie (Toni Collette). Given the dearth of acting and singing experience among these players, Lewis opts to translate the piece from Italian to English and stage it as a play with only a few pieces of music. The show still proves to be more than its director bargained for -- despite the dubious assistance of his friend Nick (Aden Young), an actor/director who's currently staging his own over-the-top production of Diary of a Madman. Although Cosi reteams Muriel's Wedding co-stars Collette and Griffiths, their characters here never share a scene. The production also includes former Men at Work singer Colin Hay in a featured role, plus cameos from Greta Scacchi and Paul Mercurio (who appeared alongside Otto in Strictly Ballroom).

Robin Ramsay
as Minister for Health

A really heartfelt film with a lot of really strong performances and some really good writing. It has its weaker acting, too, and contains its fair share of cliches, but it's still a really enjoyable movie that hits a lot of themes and spectrums.