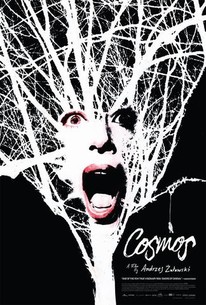 The late Andrzej Zulawski's final film, a literary adaptation suffused with his trademark freneticism, transforms Polish writer Witold Gombrowicz's novel of the same name into an ominous and manic exploration of desire. Witold who has just failed the bar, and his companion Fuchs, who has recently quit his fashion job, are staying at a guesthouse run by the intermittently paralytic Madame Woytis. Upon discovering a sparrow hanged in the woods near the house, Witold's reality mutates into a whirlwind of tension, histrionics, foreboding omens, and surrealistic logic as he becomes obsessed with Madame Woytis's daughter Lena, newly married to Lucien.

Cultists can claim it as proof Żuławski was doing his own thing until the end, but the film didn't need releasing so much as sectioning for public safety.

Not by any means for the faint of heart, Cosmos is nonetheless a juddering cloudburst of pure visual and aural energy, a rare instance of deep intellectual enquiry buoyed by unexpected jolts of pulsing emotion.

At times astonishingly beautiful. The closing credits sequence alone is lovelier than some entire movies.

Confined to a few locations and shaking with ecstasy, possibility and the torment of being alive, "Cosmos" is like absinthe distilled secretly in a prison cell.

It is possible to appreciate Mr. Zulawski's perverse ingenuity, and to miss his eye and voice, without quite succumbing to the strenuous charms and overcooked provocations of "Cosmos."

Cosmos may lack Zulawski's manic energy and sexual/psychological frankness of his earlier films. But it's not any less enigmatic.

Cosmos is a masterful, if at times exasperating, exploration of the concomitant fertility and futility in textual worlds.

Assuming Żuławski knew Cosmos would be his last film, this is a powerful, emotional farewell from a director who had so very much to say, and so many extraordinary ways to say it.

The movie asks the questions humans are condemned to ask forever: Does life have a purpose? Does it have a designer? Or is it all just an accident?

Another Żuławski extravaganza of overacting.

There are no featured audience reviews yet. Click the link below to see what others say about Cosmos!