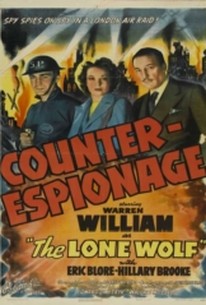 Counter-Espionage was the ninth film in Columbia's "Lone Wolf" series, based on characters created by Louis Joseph Vance. Warren William stars as Michael Lanyard, the suave ex-criminal known as The Lone Wolf. This time around, Lanyard is in London during the Blitz, where he finds himself up to his neck in Nazi spies. Counter-Espionage was one of several mid-1940s Columbia "series" films which dropped the name of the series from the title in hopes of attracting new audiences. Other examples of this trend include the "Blondie" episode It's a Great Life (43) and the "Boston Blackie" opus The Chance of a Lifetime (43). ~ Hal Erickson, Rovi

There are no critic reviews yet for Counter-Espionage. Keep checking Rotten Tomatoes for updates!

Fun entry waves the patriotic flag with a wry humor. What really makes this series worth watching is the easy, urbane chemistry between Warren William and Eric Blore as his often pained but loyal sidekick.