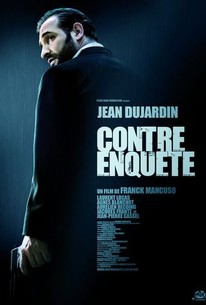 Veteran screenwriter Franck Mancuso (36 Quai des Orfevres) helmed and penned the script for the French-language detective thriller Counter-Investigation (AKA Contre-enquête), loosely adapting for the screen American writer Lawrence Block's short story "Like a Bone in the Throat." The chilly tale unfolds in the Parisian suburbs, where happily married police captain Richard (Jean Dujardin) makes the fatal decision to pass up an opportunity for a bike ride with his nine-year-old daughter Emilie (Alexandra Goncalvez), in favor of department business. During Richard's absence, Emilie slips out for a rendez-vous with a young boy of like age - and not long after, joggers discover her body in the woods, raped and beaten to death, the victim of an apparent maniac. Richard's partners arrest the most likely suspect, pedophile Daniel Eckmann (Laurent Lucas) who first denies, then confirms his involvement. In time, however, Daniel writes long letters to Richard from prison, pleading his innocence and pointing to another culprit - the serial killer Salinas (Jean-Francois Garreaud). As an initially reluctant Richard investigates, his astonishment builds upon coming face-to-face with the conclusion that all of the evidence does indeed point to Salinas; to his wife's (Agnes Blanchot) chagrin, the detective thus works toward exonerating Daniel and arraigning Salinas for the death of his young daughter. Contre-enquête represents Mancuso's first directorial assignment; as a screenwriter, he takes a number of liberties with the story, making the necessary cultural adjustments for a French setting.

Roland Timsit
as Metlouti
View All

There are no critic reviews yet for Counter Investigation. Keep checking Rotten Tomatoes for updates!

There are no featured audience reviews yet. Click the link below to see what others say about Counter Investigation!