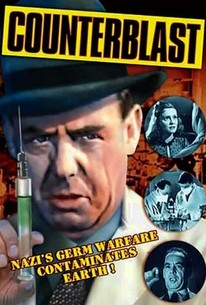 Nazi war criminal Bruckner (Mervyn Johns) manages to escape capture at the end of WW II. Bruckner sets up shop in England, where he continues his diabolical germ-warfare experiments. Murdering an Australian physician, the regenerate Nazi assumes the dead man's identity to escape detection. His downfall comes when he falls in love with pretty lab assistant Tracy Shaw (Nova Pilbeam), and he refuses to murder her when ordered to do so by his superiors. The ending is right of the "hoist on his own petard" school of dramatics. Devil's Plot was released in the U.S. in mid-1953, and within a few months was making the TV Late-Show rounds. ~ Hal Erickson, Rovi

There are no critic reviews yet for Counterblast. Keep checking Rotten Tomatoes for updates!

There are no featured audience reviews yet. Click the link below to see what others say about Counterblast!