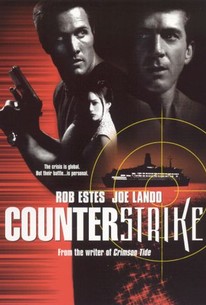 A summit meeting between the American president and the Chinese premier, held in secret on the luxury liner Queen Elizabeth 2 somewhere on the high seas, is rudely interrupted when the ship is hijacked by Taiwanese extremists. Fully prepared to nuke the vessel and spark a world war to get the point across, the terrorists cannot be stopped by traditional peacekeeping methods. It is up to a pair of long-estranged brothers, ATF agent Vince Kellogg (Joe Lando) and Secret Service operative Thomas Kellogg (Rob Estes), to secretly parachute onto the deck of the QE2 and save the world from annihilation -- with a little help from the ship's plucky (and drop-dead gorgeous) security head, Brittany Cooper (Rachel Blakely). Also appearing are Marie Matiko as Maggie Chang, a terrorist posing as a martial arts movie star, and Christopher Lawford, son of actor and former J.F.K. intimate Peter Lawford, ironically cast as the American vice president. Originally filmed as Attack on the Queen (the title of the novel on which it was based), Counterstrike first aired March 2, 2003, on the TBS superstation.

Ivar Kants
as Crewman
View All

... asks us to worry about a renegade terrorist faction of Taiwanese dissidents so determined to derail a peace agreement that they steal a submarine, hijack the Q.E. II, and threaten to blow up everybody after the usual kick-boxing.

There are no featured reviews for Counterstrike at this time.