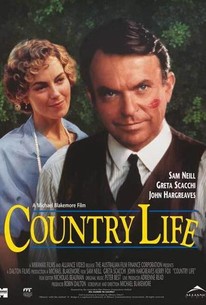 This Australian drama has been adapted from Chekov's +Uncle Vanya. It is set in post WW I Australia at a time when the Aussies were getting ready to break away from England. After his father's death, Jack Dickens sacrificed his literary aspirations to run the family farm. He lives in the old farm house with his aged mother and his plain, soft-spoken niece Sally, who was abandoned by her father Alexander Voysey after her mother, Jack's sister, passed away. Sally suffers unrequited love for Max Askey, the local doctor. Jack sends monthly payments to his brother-law Alexander, an aspiring London literary critic. After secretly dishonoring himself in London, Alexander returns to Australia with his lovely and much younger wife, Deborah. Alexander is a wind-bag and it is plain that Deborah is unhappily married. Jack and the doctor are attracted by the comely woman and vie for her attention at the expense of long suffering and ignored Sally.

Derani Scarr
as Woman in Crowd

Owen Buik
as Stationhand
View All

Country Life may not be the deepest Vanya I have seen, but it is the funniest, bringing out the play's buried potential for farce as well as tragedy.

Take it on its own terms and you have a fascinating commentary on Vanya.

There are no featured audience reviews yet. Click the link below to see what others say about Country Life!