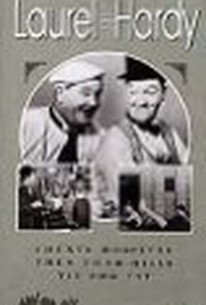 Stan Laurel arrives at the hospital to visit his friend Oliver Hardy. It takes him more time to locate Ollie's room than it does for him to destroy it completely. That happens when the doctor (Billy Gilbert at his most fulsome) enters to see how his patient is doing. Ollie, his broken leg elevated, tells him how nice it is to have some peace for once, and that's about when Stan decides to use the counterweight attached to Ollie's leg as a nutcracker. In the blink of an eye, Ollie is smashed up on the ceiling and the doctor is out the window, hanging onto the counterweight for dear life. The rope breaks, Ollie falls and breaks the bed and the doctor just barely escapes being flattened on the sidewalk far below. As a result, Ollie's hospital stay, which was supposed to last two months, has been shortened to just enough time for him to get his clothes and leave. Stan cuts off the leg of Ollie's pants so he can get them on -- the trouble is that the wrong leg was removed; what's more, the pants aren't even Ollie's, but his roommate's. Then Stan accidentally sits on a hypodermic needle that was left in the room. The needle was loaded with sedative, so when Stan gets behind the wheel to take Ollie home, it turns into a wild ride that goes on for a surprisingly long time before the inevitable accident. The first half of County Hospital is classic Laurel and Hardy fare, but the second half is marred by bad back projection. The Roach Studio was having some financial difficulties at the time, which had an affect on the quality of its releases.

Billy Gilbert
as The Doctor

May Wallace
as Head nurse

Ham Kinsey
as Orderly
View All

Although this is one of Laurel and Hardy's simpler pictures, based mostly in a single room, the slapstick is exceptionally diverting and destructive.

There are no featured audience reviews yet. Click the link below to see what others say about County Hospital!