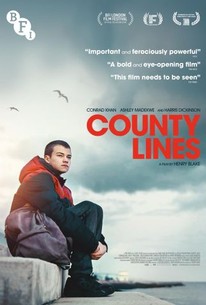 Tyler Hughes, aged 14, has the weight of the world on his shoulders. He attends a Pupil Referral Unit (PRU) in East London where he is bullied by his brutish classmates. At home he cares for his younger sister while his mother, Toni, who works nights, is neglectful and preoccupied. One day, Tyler is rescued from bullies by Simon - a "recruiter" who targets and grooms vulnerable children to promote his drug dealing enterprise out of town. Simon's allure is strong for Tyler, who quickly finds himself working for Simon, running "County Lines" trips out of town and completely out of his depth. At home his mother chooses not to question the source of the cash Tyler starts to bring home, as she has lost her job and is in dire need of it. Events escalate as Tyler becomes increasingly brutalised and damaged by the world he has been sucked into, and estranged from his mother and sister. Matters come to a head when Tyler is sent by Simon out of town, savagely attacked by a rival gang, his drugs and money stolen, and left for dead in a remote marshland. Soon after Simon comes knocking at Toni's door in search of compensation, threatening her and her daughter. Toni is now fully awake to the horrors her son has been victim to, she finds her strength and resolves to rescue him from it. Tyler's wounds eventually heal but he remains deeply traumatised. Toni's support helps Tyler break through and the family finally comes together. The film highlights the growing national crisis of 'County Lines' and the serious threat it poses to Britain's children. Writer/director Henry Blake has been working with survivors of this phenomenon for a number of years and the film is inspired by the stories he has come across.

A mournfully ambient and somewhat ethereal score by James Pickering helps elevate this above mere social realism, finding unexpected shards of beauty in even the most dismal circumstances.

A deeply impactful look at the manifold dangers our young people face today.

If you were looking for a word to describe writer-director Henry Blake's horribly timely debut you would not pick "fun", yet the filmmaking is so sharp I was hooked from the get-go.

The writing, alas, is slightly pat, and punctuated by awkward dramatic leaps - such as Tyler's transformation from angel to devil and back again - that strain against the realism elsewhere.

County Lines is a film that doesn't run along the usual rails of a gangster thriller.

An honest telling of the harsh world that feeds our addictions.

A film that confidently blends unfussy naturalism with an eye for telling details and neat cinematic phrases.

County Lines shines a necessary light on just how important it is to take care of the next generation.

Khan is a seriously gifted young actor who can convey defiance and vulnerability at the same time. He makes Tyler compelling and likeable even as he willingly enters this violent world.

An emotionally rich film that exhausts its audience almost as much as its characters, but which is well worth the effort.

Rory Steabler
One Room With A View

County Lines is powerful and delivers a visceral gut punch that will leave you thinking by the end of the film: how did we get here.

There are no featured reviews for County Lines at this time.