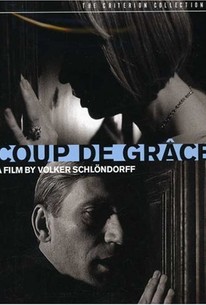 1976's Coup de Grace (released in Germany as Der Fangschluss) was inspired by a Marguerite Yourcenar novel and directed by Volker Schlondorff. The story is set in Latvia in 1919, at the height of the Soviet Civil War. Margarethe von Trotta plays an aristocrat sympathetic to the Communist cause. Besides her ruinous habit of falling love with men who do not love her, Margarethe's tragic flaw is her refusal to acknowledge the cost of the revolution in terms of human lives. ~ Hal Erickson, Rovi

The simplicity and naiveté of the film's themes are problematic.

Coup de Grâce is an ambiguously political film (the argument of its war is inherited, though neither side is defended exemplarily), in regard to both its war and sexual conflict.

"Coup de Grace" starts with the return of Konrad(Rudiger Kirschstein) to his ancestral home in the Baltic states in the winter of 1919, after many years fighting in The Great War, with his friend Erich(Matthias Habich). This instantly invigorates the spirits of Konrad's sister Sophie(Margarethe von Trotta, who also co-wrote with Jutta Bruckner and Genevieve Dormann), who had been recovering from having been raped. Even as she is feeling better, everything else is going to hell around them as the country is in the midst of a civil war where the army is not only shooting Bolsheviks, but anybody who does not inform on them. With time possibly running out for everybody, Sophie declares her love for Erich... "Coup de Grace" is a haunting movie that could have devolved into a silly soap opera, if not for Volker Schlondorff's restrained direction. What the movie is mostly concerned with is the possibility of free will in times of war. Erich is a professional soldier who feels useless unless he has a battle to wage, as he could have just easily gone to live in Paris or Berlin. I thought at first maybe he turned down Sophie's proposal because his feelings were for Konrad instead but they do exist for Sophie. He just does not want to have to worry about her in a war zone where the lines between friend and foe are nonexistent. However, she does not need taking care of, even with supplies running out and typhus rampant, as she publicly sides with the Bolsheviks.

a war that is losing it's meaning, cast in a befiitingly stark baltic landscape, is juxtaposed against an ambiguous and ambivalent relationship. some well-shot scenes evoking sophie's many psychological states. unforgettable finale.