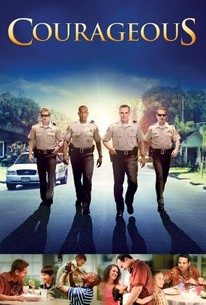 Critics Consensus: While the filmmaking is fairly competent, Courageous is overall worthless to anybody who doesn't subscribe to its dogmatic agenda.

Critics Consensus: While the filmmaking is fairly competent, Courageous is overall worthless to anybody who doesn't subscribe to its dogmatic agenda.

Critic Consensus: While the filmmaking is fairly competent, Courageous is overall worthless to anybody who doesn't subscribe to its dogmatic agenda.

Four men, one calling: To serve and protect. As law enforcement officers, Adam Mitchell, Nathan Hayes, David Thomson, and Shane Fuller are confident and focused. Yet at the end of the day, they face a challenge that none of them are truly prepared to tackle: fatherhood. When tragedy hits home, these men are left wrestling with their hopes, their fears, their faith, and their fathering. Can a newfound urgency help these dads draw closer to God ... and to their children? Protecting the streets is second nature to these men. Raising their children in a God-honoring way? That's courageous. -- (C) Official Site

T.C. Stallings
as T.J.
View All

It takes a certain touch to pull it off, and here, the serviceable cast just doesn't have it in them.

The many topics raised - gangs, drugs, immigration, absentee parents, poverty - are examined with didacticism and platitudes instead of by mining their inherent complexities.

Overplotted and understructured, "Courageous" is a slog to get through at 130 minutes.

Devolves into over-the-top drama and a suffocating heavy-handedness.

Fails to answer the more pressing question of why religious sagas such as this treat subtlety as a sin.

Courageous literally preaches to the converted, delivering ham-fisted messages of responsibility to the most receptive audience possible.

The best film yet from Sherwood Pictures.

Most of the characters are well-written and nuanced.

A significant step backward for those movie making preachers at Sherwood...

Nicely produced, but the converted are more likely to be impressed than the skeptical.

Dares to preach its highly controversial message in order to inspire the faithful while risking the ire of critics and non-believers. Its message? Fathers, man up.

From the makers of "Fire Proof" comes this movie about four cops reconnecting with their faith in hopes of building a better relationship with their children and with God. It's a pretty religious movie, that never goes overboard(although some of things that they do is pretty borderline). These movies are usually lower budget and the acting isn't the greatest. But here, you can tell they are getting better at making good, quality movies that still get the message across. The acting isn't the best, as it's filled with unknowns. But you still get engaged with the characters and their struggles, especially with a shootout towards the end(I was on the edge, I cannot lie). At over 2 hours long, the movie drags in spots, and really could have been about 30 minutes shorter. However, it's an important movie to see that gives you perspective on being a good model parent(I'm no saint, and the movie made me want to be a better Dad). I think everyone should watch this, even if your not religious. If you take the religious overtones out of this, it will still make you want to be there for your children more. Good watch with a good message.

Honor Begins At Home Good movie! This movie should inspire everyone to be the best you can be. Don't miss it. As law enforcement officers, Adam Mitchell, Nathan Hayes, and their partners are confident and focused. They willingly stand up to the worst the world can offer. Yet when they take off their badges at the end of the day, they face a challenge that none of them are truly prepared to tackle: fatherhood. While they consistently give their best on the job, good enough seems to be all they can muster as dads. But they're quickly discovering that their standard is missing the mark. They know that God desires to turn the hearts of fathers to their children, but their children are beginning to drift further and further away from them. Will they be able to find a way to serve and protect those that are most dear to them? When tragedy hits home, these men are left wrestling with their hopes, their fears, their faith, and their fathering. Can a newfound urgency help these dads draw closer to God ... and to their children? Courageous is the fourth release of Sherwood Pictures, the moviemaking ministry of Sherwood Church in Albany, Georgia. Their first release since FIREPROOF, the No. 1 independent film of 2008, Courageous joins Facing the Giants and Flywheel in touching and impacting lives through heartfelt stories of faith and hope. Moviegoers will again find themselves crying, laughing, and cheering-sometimes simultaneously-as they are inspired by everyday heroes who long to be the kinds of dads that make a lifelong impact on their children. Protecting the streets is second nature to these law enforcement officers. Raising their children? That will take courage. Courageous ... honor begins at home.

actual, real-life conversation i had with ticket-guy at my hometown theater: "Hey, um.. do you know what this movie is about? cause the poster is just four guys standing." "Yea, its a christian movie." "ok, cool. awesome... can you tell me what its about though? "Like Fireproof.. you know Fireproof? "No, i've never seen Fireproof.. whats that about?" "Look man, the.. it... its a christian thing. its like Fireproof." "well, thank you for that... two please!"